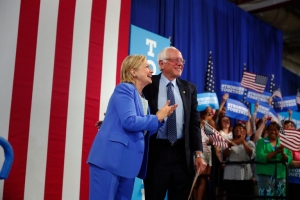 July 25, 2016 (Philadelphia) – Speaking at the Democratic National Convention tonight, Vermont Senator Bernie Sanders told delegates, “This election is about – and must be about – the needs of the American people and the kind of future we create for our children and grandchildren.” He then laid out reasons why he has endorsed his former rival, former Secretary of State Hillary Clinton, for the presidency.

He said this election is about “ending the 40-year decline of our middle class” and the fact that 47 million Americans live in poverty. “It is about understanding that if we do not transform our economy, our younger generation will likely have a lower standard of living then their parents.”

The election is also about ending the worst wealth inequality in America since 1928, said Sanders, who praised the new Democratic platform for calling for a break-up of big banks, passage of a new Glass-Steagall Act and opposition to “job-killing” free trade agreements such as the Trans-Pacific Partnership—reforms pushed through by Sanders’ delegates.

He noted that Wall Street greed resulted in the worst economic downturn since the Great Depression before President Barack Obama took office and praised the Obama administration for leading America out of the recession and curbing job losses. But he said, “much more needs to be done.”

He slammed Republican nominee Donald Trump for “bombast, fear-mongering, name-calling and divisiveness” without offering real solutions to serious problems facing working families, children, the elderly, sick, and poor. “We need leadership which brings out people together and makes us stronger,” he said, faulting Trump for insulting women, Latinos, Muslims, African-Americans and veterans.

He praised Clinton for supporting raising the minimum wage to a living wage, then blasted Trump for backing “a starvation wage.”  He added, “While Donald Trump believes in huge tax breaks for billionaires, he believes that states should actually have the right to lower the minimum wage below $7.25.”

He slammed Trump for rejecting science on climate change and praised Clinton for being willing to “act boldly” to combat climate change. “Hillary Clinton understands that a president’s job is to worry about future generations, not the short-term profits of the fossil fuel industry,” Sanders said.

Other reasons he supports Clinton include her willingness to appoint Supreme Court Justices prepared to overturn Citizens United (the decision that has allowed massive campaign contributions to influence elections), support workers’ rights, a woman’s right to choose, environmental protections, LGBT, minority, and immigrants needs.  By contrast, Trump nominees would roll back civil rights, women’s rights and environmental protections, he warned.

During the primary, Sanders and Clinton clashed over how to best help students afford college and avoid being mired in debt. Now he revealed a compromised hammered out with Clinton. “It will guarantee that the children of any family this country with an annual income of $125,000 a year or less – 83 percent of our population – will be able to go to a public college or university tuition free. That proposal also substantially reduces student debt.”

He also voiced support for Clinton’s promises to pass comprehensive immigration reform, repair a “broken” criminal justice system, and support diversity as a strength when Americans of all ethnic backgrounds, ages and national origins stand together.

He indicated that his campaign resulted in democratic reforms and a “significant coming together between the two campaigns” adding, “We produced, by far, the most progressive platform in the history of the Democratic Party…Our job now is to see that platform implemented by a Democratic Senate, a Democratic House and a Hillary Clinton presidency – and I am going to do everything I can to make that happen.”

Sanders said he has known Hillary Clinton for 25 years and recalled her as a “great first lady who broke precedent in terms of the role that a first lady was supposed to play as she helped lead the fight for universal health care. I served with her in the United States Senate and know her as a fierce advocate for the rights of children.”

He concluded, “Hillary Clinton will make an outstanding president and I am proud to stand with her here tonight.”

"It is about understanding that if we do not transform our economy, our younger generation will likely have a lower standard of living then their parents.”
When I got married we were able to buy a house and a new car, then a second car for her to drive. After a few years we saved enough to take two week vacations to the Sierras, then three week trips.
One son still lives with his mom ( he pays rent and does maintenance) and the other lives in a small apartment and drives a 20 year old truck that I gave him.
Today the wealth is concentrated among the very, very rich. A class by and for themselves.

A nice word for Socialism. And just who is going to pay for all this FREE stuff? Oh I know, my Grandchildren!