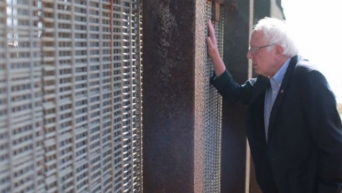 “All of this tells us why we need comprehensive immigration reform,” Sanders said after hearing the stories of families who can only see their loved ones on weekends. “I would hope that the Republicans in Congress understand that we have a very, very broken immigration system and that it must be reformed and that they should in fact work with Democrats to pass comprehensive immigration reform. If not and if I am elected president of the United States, I will use the executive powers that the president has to do that the best that I can.”

The visit was Sanders' second to the border as a presidential candidate, following a March trip to Nogales, Arizona. Sanders later held a rally at Kimball Park in National City, drawing over 7,000 attendees, before heading to Vista for a second rally in San Diego County tonight.

Sanders has previously called on the Obama administration to reassess its immigration enforcement initiative and extend Temporary Protected Status to families who have fled violence in Central America. He has introduced legislation that would eliminate quotas for the number of immigrants held in detention and ban private prisons, and cosponsored legislation to guarantee due process for border refugees. Recently, he joined a letter calling for transgender detainees to be protected from abuse, unreasonable strip searches, and sexual assault while in U.S. custody.

Sanders was joined by Christian Ramirez, director for the Southern Border Communities Coalition, and Maria Puga, widow of Anastasio Hernández Roja, who died of a heart attack after Border Patrol agents reportedly beat him and shot him repeatedly with a taser.