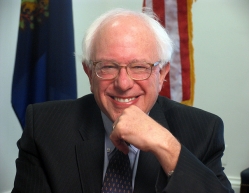 May 3, 2016 (San Diego) – Vermont Senator Bernie Sanders has scored a win in the Indiana presidential primary, taking 52.4% of the vote.  Former Secretary of State Hillary Clinton took 47.6%  with 95% of all precincts reporting.  Sanders picked up  43 delegates and Clinton 37.

Sanders is pinning his hopes on big wins in liberal bastions such as California and Oregon, which have yet to vote, then coaxing a substantial number of super delegates to change their support for the good of the party in November.   That’s clearly an uphill battlle, but  a new Rasmussen poll adds ammunition to Sanders' argument, showing Clinton losing to Trump by 2% if the general election were held today.  Various older polls  showed Clinton beating Trump by a narrow margin, but found Sanders beating Trump by much larger margins--in some cases, double digits.

Sanders stated, “I think that as more and more delegates to the Democratic convention take a hard look at which candidate is generating the kind of enthusiasm, excitement,voter turnout to make sure that someone like a Donald Trump does not become president, I think you’re going see more and more delegates concluding that that candidate is Bernie Sanders,” he concluded, then indicated that he believes he is speaking to the issues that most Americans care about including the wealth gap, helping the struggling middle class and poor, creating jobs through building infrastructure, and making college affordable.

Clinton did not issue a statement after the Indiana primary results, but is focusing her efforts next on primaries in West Virginia and Kentucky,  Appalachian coal-mining states traditionally carried by Republicans and where talk of green energy means loss of jobs for those working in the coal industry.

Clinton promised to implement a Marshall-style plan to retrain coal workers in other fields and to put her husband, former President Bill Clinton, in charge of coming up with ideas to increase manufacturing in the region.  ““I am a ‘make-it-in-America’ fanatic,” Clinton said. “I know how disappointed people are in government and politics,” she concluded, adding, “I’m going to tell you what I’m going to do, so you can hold me accountable.”