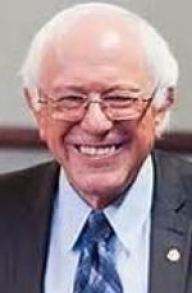 May 10, 2016 (San Diego) – Vermont Senator Bernie Sanders soundly defeated former Secretary of State Hillary Clinton today in the West Virginia  Democratic primary, a state Clinton won handily against Barack Obama in 2008.  Sanders breezed to a win with over 51% of the vote, while Clinton got just 36%.

Clinton has been treated by media and party insiders as the presumptive Democratic Party winner throughout the primary season—despite losing to Vermont Senator Bernie Sanders in most states to date.  The problem for Democrats is that increasingly, polls show Sanders more likely than Clinton to defeat presumptive Republican nominee Donald Trump.

A new poll released today by CNN shows Clinton losing to Trump in battleground states 39% to 37%, whereas Sanders would win handily with 52%, Trump scoring just 30%.

Six recent national polls show Sanders trouncing Trump by margins ranging from 14 to 24 points, Real Clear Politics reported.   By contrast, when voters were asked about a matchup between Clinton and Trump, one poll found Clinton losing to Trump, while five others showed her winning by slim single-digit margins, some within the margin for error. Only two showed wins in low double digits.

Adding insult to injury, a Public Policy Polling result released today shows voters surveyed said Trump is less popular than root canal surgery, lice, used car salesmen or the DMV.  Other polls have shown high unfavorability ratings for both Clinton and Trump among voters.  While many view Clinton as having more depth of experience, more view Sanders as honest/trustworthy.

Sanders draws strong support from independent/decline to state party voters, who now make up roughly a third of the electorate—and a constituency both parties must woo to win the White House. He drew an overflow crowd of 21,000 this week in Sacramento, California, which has the most delegates of any state in the union and could prove to be a kingmaker—or queenmaker—in the Democratic primary.

Clinton leads Sanders in pledged delegates 1,704 to 1,421.  A total of 2,382 delegates are needed to win the Democratic nomination.  However there are also 712 superdelegates, of whom 523 have said they support Clinton and only 39 say they support Sanders.  That could change, however, if Sanders surpasses Clinton by the convention date or comes close, and poll numbers continue to show Sanders more likely to beat Trump, since in theory superdelegates can shift allegiances if they so choose, though traditionally few have done so.

Trump, with no Republican opponents left in the race, won the West Virginia contest hands down.