“Everybody forgot the Mission. But we are making a comeback. Our goal is to recognize and reconcile long-time differences between the Native, Anglo and Hispanic populations by restoring the Mission and bringing back historical community events like the annual Harvest Festival and Fiesta.” -- Gil Koda, parish finance councilman, volunteer

August 31, 2018 (Santa Ysabel) – A Herculean effort is underway to restore the Santa Ysabel Indian Mission (23013 Hwy 79) in time for its bicentennial celebration on Sunday, September 16th,, 2018 at 10 a.m..  The multi-cultural celebration will include an outdoor mass and brunch with the Bishop, Native American bird singers and drummers, a flyover by the Navy’s Blue Angels, military salutes, multi-cultural dance groups, local celebrities, a historical wagon train show, tours of the mission and museum, Native speakers and historians, an arts and crafts show, and more.

Two other long-time community traditions are also being revived: the Harvest Festival on Saturday, October 20th and a Fiesta in June 2019. There will also be a golf tournament on September 8th at the Warner Springs resort as a fundraiser for these ambitious plans. 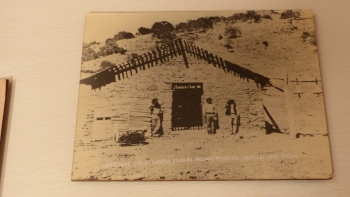 Founded 200 years ago as an outpost or asistencia of the  Mission San Diego de Alcala, the Santa Ysabel Indian Mission has been holding religious services at the site ever since—and today serves a diverse population in the community. A photo of the original adobe chapel still survives. (Photo, right, original 1818 mission.)

The Mission has survived turbulent times and was nearly forced to close down recently due to disrepair, but a finance council started in 2016 has been working hard to find missing records and tackle the Goliath restoration task.

“Everybody forgot the Mission,” says Gil Koda,volunteer parish  finance c ommittee councilman and husband of an Iipay tribal member. "But we are making a comeback. Our goal is to recognize and reconcile long-time differences between the Native, Anglo and Hispanic populations by restoring the Mission and bringing back historical community events like the annual Harvest Festival and Fiesta.” 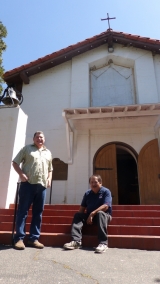 Garth Schulte, Chairman of the bicentennial committee, says Santa Ysabel is believed to have been holding services continuously longer than any other mission parish in California. “Even when the buildings crumbled, they built palapas and continued,” he says   (photo, left, Schulte and Koda)

Just two years ago, the congregation was nearly zero, Koda says.  “We were appointed. We had no priest for quite a while; we had to sue retired or visiting priests..We had a Deacon, Fred Thornton, an SDPD officer in charge of parishes here and in Julian. We were tasked to try and salvage the parish here. There was a possibility of chapel closure.” 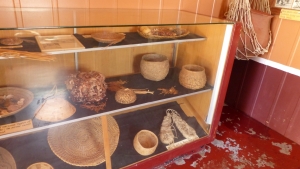 In March of this year, restoration efforts began in earnest.  “We had a big gathering to maintain and save buildings that were leaking very badly.  The main hall, rectory chapel, all the buildings were leaking. The cracks were so big we had bees coming through and ah hive on the roof!” Koda recalls. “We had no records. No archives. The museum smelled awful- there were rat droppings and it was not habitable or breathable. We spent two weeks bleaching the floor…Artifacts had deteriorated.” 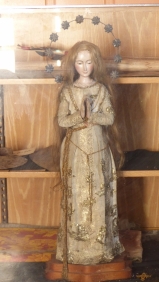 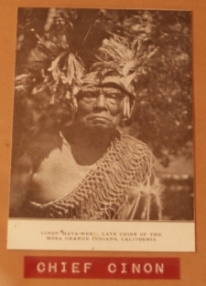 (Photo, left: Madonna statue and historical Native American photos are among the treasures in the Mission's museum.)

The committee members began to do internet research, reaching out to Santa Barbara’s mission that had archival materials, local historians and Daughters of the American Revolution which had a plaque outside the sanctuary.

Today, about 50 families continue to worship here, including Indians and non-Natives.

The site is a state historic landmark, and organizers of the bicentennial hope to attract national recognition. The September 16, 2018 bicentennial is the start of a series of celebrations. The October 20th harvest festival  also revives a 200-year-old  tradition, though it hasn’t been held for the past 10 years. Next June’s reinstated fiesta will include a deep pit barbecue, dancers and celebration including all in the community. Raffle tickets are on sale for a mission quilt in honor of the bicentennial.

Efforts are underway to restore a Madonna statue in the grotto and a stained glass window originally from Italy.  Long-time local families are also helping including Fred and Ann Artho; Fred, a retired Navy Seal, has been music director since 1950 and has been opening and closing doors seven days a week at the mission for the past 68 years.

The mission’s history and heritage

The first mass was held here on September 20, 1818 in a brush ramada. After the first chapel crumbled with age, a second, wooden chapel was constructed nearby but later burned, with Indian parishioners inside narrowly escaping the blaze.  On or nearby this site a third chapel was built, later 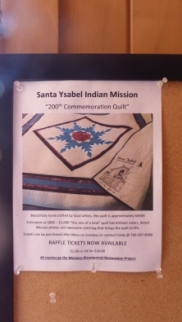 replaced by the present chapel that began construction in 1924.

(Photo, left: quilt to be raffled off at bicentennial)

With Spain’s power weakened by wars in European and the American independence movement, and later, Mexican independence, funds for mission expansions were virtually cut off.  Then in 1834, a secularization decree proclaimed in Mexico further undid much of the work of Franciscan friars in the past 70 years. Santa Ysabel had no resident priest, but relied on visiting priests to conduct services and baptisms.  Still, the outpost had a granary, vineyards, fields, a cemetery and several houses as well as a chapel.

In 1835, Jose Joaquin Ortega was appointed administrator of San Diego mission properties. He wrote to Governor Juan Bautista Alvarado claiming Santa Ysbael “as in ruins” and that only 50 people remained. Father Oliva wrote that this was untrue and said some 580 Indians inhabited the area which was self-sustaining and moreover that  “the law says that the natives and possessors of land are its legitimate owners.”  But he was unable to save the Santa Ysabel Indians from plundering by Ortega and is son-in-law, Edward Stokes, according to history provided in the state landmark application.

In 1846, General Stephen Kearny and the Army of the West marched into the area and spent the night of December 4th at Santa Ysabel enjoy roasted mutton, tortillas and wine – which proved to be the last meal for 16 soldiers subsequently killed in the battle of San Pasqual. 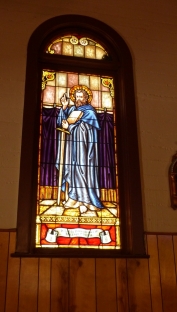 The Mexican government recognized that land belonged to the Indians. But the U.S. government didn’t acknowledge this.  In 1852, treaties set aside much of the mountainous area for the Santa Ysabel Indians and other Diegueno bands, but the California Legislature and U.S Senate later that year rejected all 18 treaties.

(Photo, left: One of several beautiful stained glass windows in the current chapel, the fourth chapel to occupy the site.)

The area soon attracted dairy farmers and when gold was discovered in Julian in 1870, an influx of white squatters who forced Indians off rich agricultural lands.  In 1875 the first Tipai-Ipai reservations were established, though inadequate, and by the 1890s many Native Americans labored on ranches and in towns, but returned to reservation lands for fiestas.

When California annexed the area in 1903, “they moved the Native population off Warner Springs and moved the Cupa forcibly to Pala,” Shulte recalls.  The son-in-law of the governor of California wanted the land, but the legality was pretty poor, even in those days.”

Uprisings occurred in other mountain areas but the Santa Ysabel Indians remained peaceful, though the burning of the mission “might’ve been an accident, or it might’ve been arson,” Koda reflects.” He says today, the government’s actions are acknowledged as sha 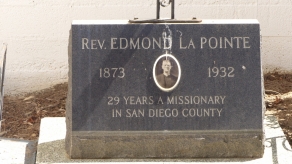 meful. “They formed reservations during President Ulysses S. Grant’s days but the Indians were pretty much enslaved here,” he acknowledges.

The bicentennial is “all about reconciliation here,” he says, hoping to unite the community scattered to the tour winds and make the mission a center of positive activities for the community.

Through the years after secularization, the mission fell into ruins.  Father Edmund La Pointe, a priest, worked tirelessly to rebuilt the mission from 1903 until his death in 1932, and is buried per his request in the shadow of the mission chapel (photo, right)

Through all of these travails, however, reservations throughout the region hosted fiestas that included Indian, Spanish, Mexican, California frontier and contemporary American customs and beliefs . 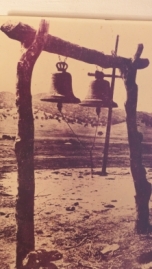 Today the buildings are owned by the Catholic diocese, but most of the 16 acres are tribal land held in trust by the U.S. government.

An enduring mystery involves two chapel bells stolen in November 1926. (Photo, left). Only the clappers were left on the ground and can be viewed today in a small museum at thet site.   The top part of one bell, cut off with an acetylene torch, was returned in 1965 by an anonymous donor but hopes remain the that other bell, which dates back to the 1800s, may someday yet be found. A new bell dedicated at the mission’s 175th anniversary once again calls the faithful to the Santa Ysabel Indian Mission. 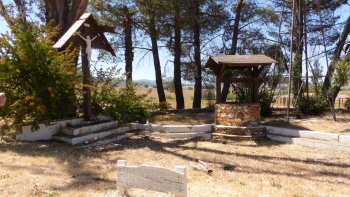 Recent archaeological dig work discovered the floor of the original 1818 chapel (photo, right), where the outdoor mass will be celebrated to commemorate the mission’s 200th anniversary as the church works to remember the past while reaching out to heal and unite the diverse population of Santa Ysabel and neighboring communities.

Donations and volunteers are sought to help with the ongoing restoration work and bicetennial activities.

You can learn more about the mission at https://www.facebook.com/santaysabelindianmission/.