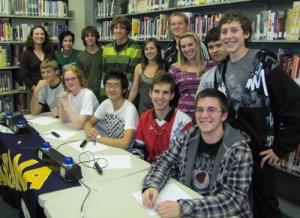 January 24, 2010 (San Diego's East County)--Rain did not dampen the Academic League spirit or acumen last week. The brain power exhibited at the host schools gave off more than enough heat to fight off the winter cold outside!

In Junior Varsity action, Granite Hills and West Hills remain undefeated both with 6 wins and 0 losses. At the El Capitan vs Steele Canyon match, the Cougars, coached by Betty Jensen, got off to an early lead when the Vaqueros, coached by Dena Rosenberger caught up about half way through the 25 minute time period. The lead changed hands a couple of times until El Capitan went on to finally win this close contest. 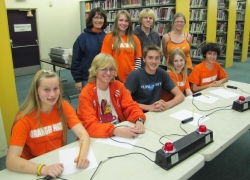 In still another JV match, Valhalla, coached by Peggy Ormsby, pulled out a close win over Santana, coached by Brooke Crocker: 68 to 57. There was a large audience of around 50 people to watch this exciting contest. The score was only 3 points apart with 2 minutes left in the match, when the Norsemen got the last several questions to defeat a scrappy Sultan squad. Captain Jaran Mullen led the way for the orange and blue assisted by Ian Benjamin. For the purple and gold, captain Garet Webster and Brian King were both active. (For the color blind in the audience, orange and blue = Valhalla; purple and gold = Santana.) 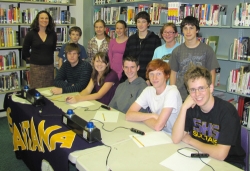 Most of the scores in Varsity competition were more one-sided. El Cajon, coached by James Austin, gave Granite Hills, coached by Ron Whitney, an early run for the money, before the Eagles caught fire and defeated the Braves by a comfortable margin. 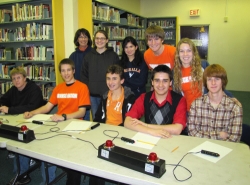 The Valhalla varsity got off to a great start as well led by captain Max Engel and assisted by Nic Zinter and Scott Woods, until the Santana team controlled the buzzers with a commanding lead to the end of the 35 minute match. The Sultans were superbly led by Captain Scott Hung with strong assistance from Thomas Bennett, Connor Wilson, Jason Thomas and Ian Davies. Norsemen coach Peggy Ormsby substituted players throughout the match getting all of the students involved. Santana coach Brooke Crocker substituted for her entire starting line up near the conclusion of the match.

For complete match results and the standings after 8 weeks of Academic League action, click here.