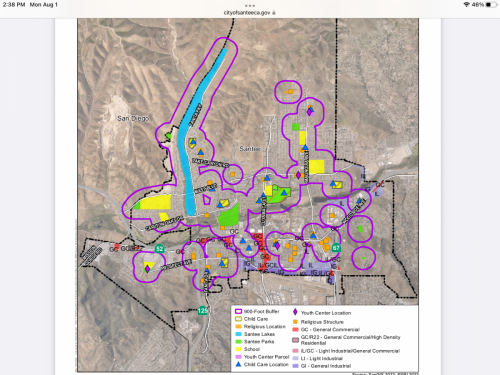 August 1, 2022 (Santee) -- Santee is the latest city in San Diego County to permit cannabis businesses including sale of marijuana within its borders, following a 3-2 vote at its most recent City Council meeting July 27.

The vote to approve a community benefits agreement, a type of development agreement that precludes a public vote via a ballot measure, came after the Santee City Council held its sixth public workshop on the issue dating back to last year.

On a motion made by Councilman Rob McNelis to approve the agreement, three voted in favor with McNelis joined by Councilmembers Laura Koval and Dustin Trotter. Mayor John Minto and Vice Mayor Ronn Hall voted against the measure.

Under California law, personal use of marijuana (cannabis) is legal statewide, but cities and counties have the right to control whether or not marijuana can be sold within their borders. Cities such as Santee can also decide whether or not to allow manufacturing of cannabis products, cannabis cultivation, and other cannabis businesses.

The consensus of the Council was that Santee, which previously prohibited the sale of cannabis within its borders, needed to be proactive and regulate the drug before the state or private parties challenged the law, and likely prevailed. Should that happen, Santee would have little or no control over how the drug is sold, the locations of the stores, and how it’s taxed, some Council members said.

“Over the last year, my opinion (on retaining the prohibition) has changed the more I educated myself,” Koval stated.

McNelis, who has led the charge on this issue, said the city has looked at many aspects of the issue, and refuted some arguments against the sale of the drug locally. He said the drug dispensaries would be regulated, and that claims by opponents that legalization would will cause an uptick in crime don’t hold up.

“I think we’ve looked into this every way we possibly can,” McNelis said. “It is monitored, and it is regulated….It has definitely changed from 10 years ago, 15 years ago.”

McNelis said the community benefit agreement model will give the city greater flexibility in making any changes should that become necessary in the future.

Jim Bartel, a former Santee City Councilman from 1980 to 2002, and a consultant for some cannabis businesses, said at the recent Santee meeting there have been no law enforcement problems associated with the approximately 40 dispensaries that have been approved in San Diego County. He also said that cannabis was much safer than most drugs found in people’s medicine cabinets.

Vice Mayor Hall, who has taken the clearest opposition to allowing local cannabis sales, said while California has made cannabis legal, its use is still against federal law, and “federal beats the state.” He also said people who are high on cannabis can cause fatal auto accidents, and that the promise of increased tax revenue isn’t worth the downsides of selling the drug, which he considers an entry drug for young people.

Minto, a former San Diego Police detective, didn’t comment about the proposed law leading up to the vote, and only said whatever the outcome, the Council should stand united.

Just how much the city can collect from the sales of cannabis is unclear, since the Council didn’t adopt a set of specific fees or taxes. City Attorney Shawn Hagerty said those issues will be brought back to the Council at a later meeting, but no date was specified.

Santee staffers estimated at one meeting that sales per dispensary could reach about $3.5 million annually. The Council has discussed taxes ranging from 4 percent to 12 percent of gross sales, but has not set any specifics within the adopted law, which had its first reading July 27.

In earlier workshops, the Council said it would limit the number of retail outlets to four. However, it didn’t put any number on possible manufacturing, distribution, or testing facilities that may be permitted. The locations of these facilities are confined to the city’s industrial and commercial zones, primarily in the city’s southeastern section, because of limitations due to proximity of certain other buildings.

Cannabis facilities cannot be located within 900 feet of schools, daycare centers, youth centers, religious locations and parks, according to the