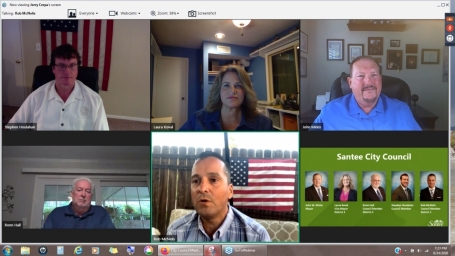 June 25, 2020 (Santee) -- Santee’s leaders decided they needed to make a public denunciation of racism, hate speech, and intolerance in response to a flurry of recent ugly incidents in their predominantly white city.

At the June 24 City Council meeting, Mayor John Minto said the unanimously passed resolution condemning racism will be a guiding principle as the city confronts its past.

“We acknowledge that we’ve had problems but we’re not going to allow those problems to stop us from moving forward and doing better,” Minto said.

Starting in May, Santee sustained massive negative publicity from two separate incidents of people shopping in local grocery stores; one shopper wore a KKK sheet, and a couple had Nazi swastikas on their masks. Both incidents were investigated by the Sheriff’s Department for possible hate crimes, but the people weren’t charged.

Then in early June, as various groups demonstrated against police brutality stemming from the death of George Floyd in Minneapolis, there were several documented violent altercations in and around the intersection of Mission Gorge Road and Cuyamaca Street involving protesters with Black Lives Matter and a loose knit group of people calling themselves East County defenders.

Councilman Stephen Houlahan noted that adopting the resolution denouncing racism was absolutely necessary in light of the economic and social toll that comes with the perception of tolerating racism in this community.

“We need to condemn those actions that occurred,” Houlahan said. While he applauded people for exercising their First Amendment rights to express their views in public, he admonished those who were intent on using violence, brandishing weapons, or looting.

“Use your First Amendment rights but do not violate the law by attacking each other,” he said. “We don’t want people running in our streets with guns.”

According to the resolution, the recent incidents of racism “have demonstrated the need for the city to assess its past, identify and acknowledge past instances of racism and intolerance in the community, and to recommit to equality, the promotion of tolerance and the denouncing of hate speech and racism now and in the future.”

Councilman Ronn Hall said while he agreed that passing the resolution was necessary, it is only a first step towards dealing with the problems. He said the council needs to make sure the resolution “isn’t just a piece of paper,” and advocated for regular reporting on the work of the Community Oriented Policing Committee (COMPOC). That group, which usually advises the Sheriff’s Department, was recently expanded by four new members who have experience in dealing with racism and intolerance.

His proposal ignored the fact that festivals and gatherings of any type remain prohibited currently by county and state health officials due to COVID-19.

Minto said the most recent COMPOC meeting generated a good deal of ideas, which should yield some possible programs that he would soon be sharing with the Council.

In other actions, the City Council took a look at the issue of creating more affordable housing, and mandating the building of such through an inclusionary housing law. The idea that has been used extensively in the state requires all new housing projects to have a certain percentage of units that are discounted and sold to folks with reduced incomes, who are unable to afford the market rate housing.

The law would establish a mechanism for developers to pay into a city-controlled fund if they decide not to set aside any of the units as affordable. These “in lieu” funds could be used by the city to help create the affordable units on other parcels at some future date.

Houlahan advocated adopting the rule and establishing a 15 percent minimum for affordable units for all new projects. But the rest of the Council wanted to ensure that local developers and builders provide their input before the city adopts such a rule.

McNelis said adopting the rule would effectively kill any infill development because setting aside lower cost units as affordable means the builders can’t make a profit and will result in no housing being built.

Santee, along with every other city in the state, is being pressured by Sacramento to build more housing in general, but mainly more units affordable to moderate and low income residents. A median priced single family house in Santee is now going for $535,000, according to Redfin.

Several members also mentioned a General Plan Amendment that will be on the Santee November ballot that could throw a wrench into any inclusionary housing rule. That amendment would require a public vote for any project that doesn’t conform to the city’s General Plan. Houlahan, along with Preserve Wild Santee, an environmental advocacy group, championed the initiative.

In a 4-1 vote with Houlahan being the sole no vote, the Council approved  spending of up to $37,500 for a consultant study of the in-lieu fees for affordable housing, but required the city’s planning staff to first hold meetings with representatives of the development community, including both the Building Industry Association and the Apartment Owners Association.

Looming ahead for the Santee City Council are two significant residential projects: Fanita Ranch, slated to create 2,949 units, and Carlton Oaks Golf Course, which includes 285 units, a 126 room hotel, and an 88-unit senior living facility in conjunction with a total revamp of the golf course.