Photo:  the old Pure Flo site. Seven of the 10 acres will be developed to 80 condos and called Laurel Heights.  The part fronting Mission Gorge, 3.3 acres, will likely be developed for housing, but owners haven’t signed any deal yet.

Last month, the Santee City Council approved an 80-unit condominium project on a seven-acre parcel that makes up most of what’s called the Pure Flo Water site at 7739 Mission Gorge Road.

The development joins three other residential projects in the vicinity, Vela, 114 units of rentals; Ariana, 45 condos; and Robinson Lane, 10 single family homes. All three projects are on Caribbean Way off Mission Gorge Road.

The project at the Pure Flo site, called Laurel Heights by developer Cornerstone Communities, differs from the others in having a larger footprint, more space, and each unit having its own backyard.

“We knew we had to do an attached product but we wanted to offer buyers as much single-family home features as we could,” Kretowicz said. “Most condo projects you’re lucky if you get a nice balcony. This is going to have a yard area which is good if have children or pets.”

The plans call for the construction of 20 two-story buildings with units ranging in size from 1,680 to 1,800 square feet. Besides the backyard, each unit has a two-car garage, and most will have nice views of Mission Trails Park, right across the street.

Kretowicz said the development will not include some three acres fronting Mission Gorge Road that once housed Pure Flow Water’s distribution business. The parcel’s owner, the Charles Grant Family Trust, has been in negotiations with a senior housing developer for the remaining 3.4 acres, and could be asking the city for a rezone from current general commercial zone to R-22 Residential or up to 22 units per acre, said city planner Michael Coyne. 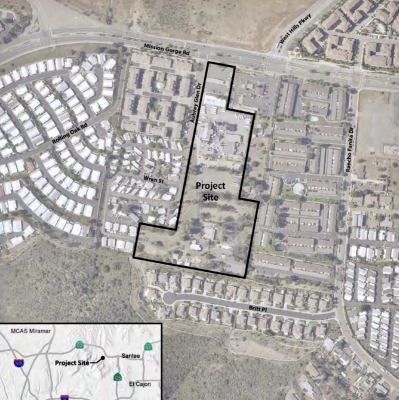 Photo:  an aerial map of the entire Pure Flo site being developed as Laurel Heights with 80 condos. Map provided by developer Cornerstone Communities.

Santee will soon conduct an environmental analysis of this site and 27 others as part of its Housing Element, but there is a strong probability the site will be changed to accommodate more housing units, Coyne said.

At one point, the Pure Flo site was considered among a handful in Santee that could be redeveloped for low-income housing, allowing much higher densities, and accommodating about 200 units. But because the parcel was split, it can handle only about half that number.

Coyne said the site wasn’t designated as low income by the city, only that it had the capacity to handle the higher density for low-income housing. Santee must add 1,219 new houses to its rolls over the next eight years, with about half that number being in the low-income category.

The 80 units being added over the next two years are definitely not low income. Kretowicz said when finished the prices will be in “the mid-$600,000 range.” Given that the median for San Diego County for a single-family home was $865,00 as of June, that price sounds like a bargain. Because Laurel Heights is a condo project it should be cheaper, but who knows what the market will be like in two years?

Another nice thing about the new development is all the appliances are electric, and won’t include gas. Coyne said Ariana was the first all-electric project in Santee, but it’s still something to highlight. As part of Santee’s Sustainable Plan, the city encourages new developments to be fully electric, he said.

Besides the appliances, the project includes solar panels and car recharging stations.

“It’s really geared to energy efficiency which is top of mind for our buyer demographics,” Kretowicz said.

Unlike a good deal of new housing coming before the City Council in recent years, the Laurel Heights project generated not a peep of opposition.

Santee Planning Director Melonie Kush said the Laurel Heights project would not require a public vote because it conforms to the city’s General Plan.

In making his motion to accept the city staff’s recommendation to approve the project, Councilman Rob McNelis said he was glad to see Cornerstone provide a higher number of visitor parking spaces (27), and that the project’s CC&Rs explicitly require that garages must be used for parking only, not storage spaces. That way, residents won’t be seeking off street parking on nearby streets, he said.

The City Council approved the project on a 5-0 vote. Kretowicz said grading should begin by the end of this month, and the first models should be done by April, 2022.

Coyne noted the area at the western edge of Santee will likely see even more housing in the coming years. Three parcels next to the Treviso condos in the 7800 block of Mission Gorge Road were rezoned R-22 a few years ago, and the owners are looking to sell to a developer.