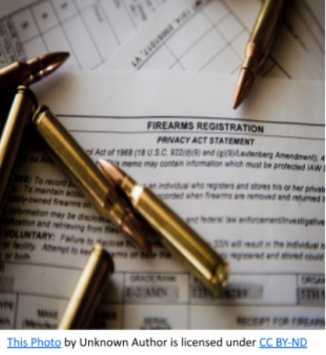 June 2, 2021 (Santee) -- On the same day that a San Jose rail yard employee fatally shot nine of his co-workers before killing himself, the Santee City Council unanimously voted to send a letter to Congressman Darrell Issa opposing a bill in Congress that would place more controls on gun ownership, including more stringent background checks.

The timing of the Council’s vote on May 26 was coincidental to yet another horrific mass shooting this year, when 230 similar shootings (classified as more than four fatalities) have taken place in the United States so far in 2021. But that event did not sway the city’s elected officials from taking a stand opposing HR 127, called the Sabika Sheikh Firearm Licensing and Registration Act.

Santee was the scene of a mass school shooting in 2001, when a 15-year-old student opened fire at Santana High School, murdering two people and wounding 13 others.

Mayor John Minto said the city was weighing in on the proposed bill, pending before the House Judiciary Subcommittee on Crime, Terrorism and Homeland Security, because a large number of Santee residents asked the Council to take a position on it, “and it’s our responsibility to represent them.”

Councilman Rob McNelis, who asked for the item to be placed on the City Council’s agenda, said the bill imposes onerous restrictions on the Constitutional rights of Americans to buy and sell firearms.

“It’s a far over-reach,” McNelis said of the bill. “It’s an obvious and aggressive attack on our Second Amendment rights…It’s definitely the worst-written bill I’ve ever seen attacking our Constitutional rights.”

The bill, introduced by Rep. Shelia Jackson Lee (D-Texas),  would require gun owners to have their firearms licensed by the Department of Justice, prohibit the possession of ammunition that is greater than .50 caliber and large ammunition feeding devices, and create a publicly available database of all registered firearms.

In addition, the bill’s licensing requirements include being at least 21 years old, passing a criminal background check, undergoing a psychological evaluation, successfully completing a training course, and obtaining an insurance policy issued by the U.S. Attorney General’s office.

In its letter, the Council said the bill would require gun owners to shell out about $800 for insurance and would impose significant fines and jail time for those who aren’t in compliance with the legislation’s provisions. “Enactment of this bill would effectively gut the 2nd Amendment and transform gun ownership in America into a privilege granted by the federal government instead of a fundamental right enshrined in our Bill of Rights,” the letter says.

The bill has not made it out of the subcommittee and has no co-sponsors. The Biden Administration has not taken a stance on it.

Two local residents, both of whom are frequent speakers during public comment periods at Council meetings, opposed sending the letter.

Mary Hyder said it was hard to understand why the Council would want to spend its political capital on a letter opposing something that the majority of voters in California and the nation support.

A national USA/Ipso poll earlier this year found 65% of Americans surveyed favor stricter gun laws. A poll by the Public Policy Institute of California released days ago found 63% of Californians want stricter gun laws and half said they are very or somewhat concerned about mass shootings, ABC  7 reports.

Just as people must submit to licensing when they want to drive a car, sell real estate or become a notary, so too should gun owners be required to submit to background checks, Hyder said said.

“I want the Santee City Council to explain why background checks, training and a nationwide registry are a bad thing,” Hyder said.

Janet Garvin said that gun legislation isn’t the purview of the City Council, and if individual Council members feel strongly about an issue, they can send their own letters opposing the bill. By sending the letter, it’s giving the official endorsement of Santee, and does not represent the feelings of the citizens of the city at large, Garvin said.

“Doesn’t the Council have more important work to do? And if you must talk about it, why don’t you discuss solutions to the epidemic of gun violence?” Garvin asked.

On her Facebook page, Christina Perry, a local teacher commenting on the letter, said among her duties is teaching four and five year olds what to do in case of a mass shooting. “The children are terrified. The mayor should come to any school in Santee and help sit with students during a lock down drill. It’s definitely a game changer,” she wrote.

the retrumplican santee city council has a mass shooting and they will not support a law that will make it less easy to get guns..... shame on you all!!!!