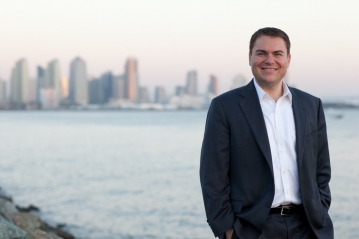 February 21, 2017 (Poway) – Jamie Franks, U.S. Navy veteran, Navy rescue swimmer, top competitive shooter and star of the History Channel’s hit television series “Top Shot” and “Top Shot All-Stars, will participate on a panel discussion at the2017 Regional Firearms Law Conference, an event open to the public, from noon to 4 p.m., Sunday, Feb. 26, at the Poway Center for the Performing Arts 15498 Espola Road, Poway. The public is invited to attend and learn about recent laws regarding firearms, including pistols, rifles, shotguns and accessories such as concealed weapon permits, ammunition and ammunition magazines.

“We are hosting this conference to help inform and educate law-abiding citizens about recent gun laws and firearms laws from various perspectives,” said Michael Schwartz, executive director, SDCGO. “Our panel members will cover fire laws from an activist, retail, legal competitive shooter and political perspectives. Gun laws are tough, and our goal with this event is to help all the attendees to stay out of cuffs.”

“The Second Amendment is not only about the right to bear arms, but our basic and fundamental right to self defense,” said DeMaio, who has been hosting a radio talk-show on KOGO-AM since 2015. “Gun laws are tough, and our goal with this event is to help all the attendees to exercise their rights within the law.”

The TRUTH about the "supremacy clause" - our Constitution does not delegate to the government authority to restrict our arms, ammunition, regulate firearms dealers, do background checks, etc. The government may not lawfully circumvent this restriction by means of a treaty wherein the signatory governments agree to disarm their Citizens or Subjects. https://publiushuldah.wordpress.com/?s=The+TRUTH+about+the+%22supremacy+clause
The right of a citizen to bear arms, in lawful defense of himself or the State, is absolute. He does not derive it from the State government. It is one of the high powers" delegated directly to the citizen, and `is excepted out of the general powers of government.' A law cannot be passed to infringe upon or impair it, because it is above the law, and independent of the lawmaking power." [Cockrum v. State, 24 Tex. 394, at 401-402 (1859)]