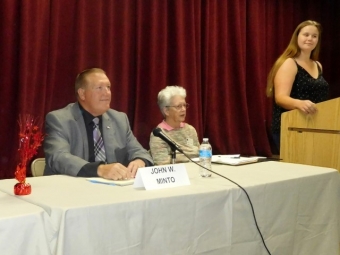 October 18, 2016 (Santee) -- A Santee candidates’ forum held Oct. 13 at Rio Seco School found common ground on some issues, but differences in how to solve problems and shape the city’s future.

The forum, attended by about 200 people, was one of only a few events where the Santee City Council and mayoral candidates for the Nov. 8 election appeared. It was sponsored by Santee Solutions and the Santee Mobilehome Owners Action Committee, and moderated by the San Diego League of Women Voters.

One thing all five candidates seemed to agree on: there has to be a better way of getting around town and cutting congestion on Highway 52, and its entry points.

“Traffic is the No. 1 issue here,” said Mason Herron, one of three men running for a single, open city council seat. The other two are Stephen Houlahan and Dustin Trotter. “We have to get developers in the future to pay for their fair share.”

Daily traffic backups along Mast Boulevard and other entry points to SR 52 were blamed on a slew of new housing projects, and inadequate transportation planning.

All agreed a proposal to open up Mast Boulevard to Lakeside was not the right solution, and advocated working with state and regional planners to widen or add lanes on SR 52 in the future. 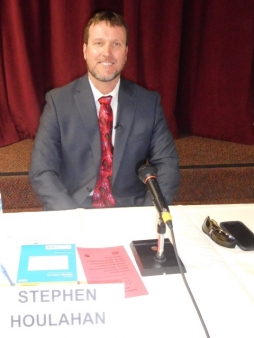 Asked whether they’d support more residential development, most candidates said as long as projects come with the appropriate infrastructure improvements, they would support it.

Rob McNelis, a current Council member and realtor who is running for mayor against fellow Councilman John Minto, a retired police officer, said some smaller residential projects have to be done. “But I’m opposed to higher density. If we do build, we need to build detached houses. We already have a lot of condos. Been there, done that.”

Minto, who has served on the council for 14 years, said the developers of the largest planned housing project, Fanita Ranch, which will be about 1,400 homes, needs to work with the environmental community to see how the impacts from the new housing could be best mitigated.

Houlahan used the chance to criticize the incumbents for having taken a far too lenient approach to new housing projects.

“To say that developers will do the right thing without someone holding them accountable is not realistic,” he said.

Houlahan, a registered nurse, touted his role as president of Save 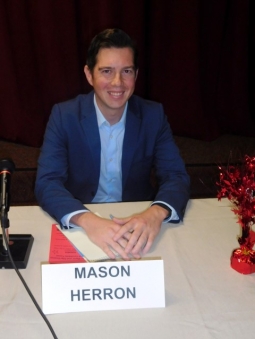 Mission Trails and stopping the Quail Brush energy plant from being built at Mission Trails Regional Park. He said he was opposed to the Castlerock project of 415 new homes near West Hills High School go forward. “We should have stood together and stopped it. But that’s only one development coming to town. There are thousands of them.”

Trotter said Castlerock, which broke ground this summer and will be completed next year, shouldn’t have been approved. (In fact, the project was approved by the city of San Diego, which then arranged for Santee to annex it last year.)

Trotter said his experience as the owner of a general contracting business gives him a better background to understand new development and ensure that it’s done responsibly.

Trotter said he supported well-planned projects including much-needed starter homes. “I believe in the American dream and that people have a chance to own their own home.”

To a question on campaign contributions and developer involvement, Herron said he had about 160 contributors giving a range of few dollars to the maximum individual limit of $700. McNellis said he was the biggest contributor to his campaign, but there was one developer, Michael Grant and his wife who gave the maximum of $1,400.

To a question about mandating solar panels on new development, most candidates said the city has laws that give some incentive for this, but would oppose making this a requirement.

Herron, a district director for Assemblyman Brian Jones, said a system that already exists today, giving owners the chance to install solar as they wish, is working fine. “For us to come in and say you now have to do this, I’m against it.”

McNelis pointed out that mandating solar panels on new projects would greatly add to the cost, and that not all buildings, including his own, would benefit because they didn’t get much sunshine.

Regarding the homeless issue, most candidates said the city and county already spend considerable funds to help those who are in need. The problem, most said, is many of the homeless have no intention of changing and prefer living on the street. 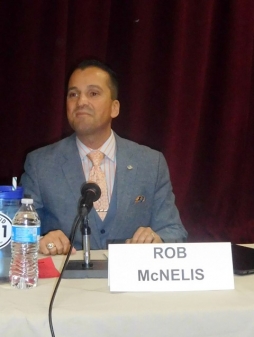 Herron said that Santee could learn from other cities that have reduced their homeless populations. He said folks avoid using public trails because of homeless people occupying them; that is a quality of life issue that needs to be addressed.

McNelis noted that Santee already has a homeless outreach team to help those willing to accept it. “The reality is that the vast majority of people down (near the San Diego River) want to be there.”

Houlahan said the city should do more in terms of outreach, and pursue federal grants to help the homeless-- especially families with children.

Although Santee has already outlawed marijuana dispensaries, candidates were asked to weigh in on what they would do if Proposition 64, which legalizes its use and sale, passes.

Each of the five agreed that the city’s existing law banning pot shops should prevail, and that even if the state allows it, the sale of marijuana is still against federal law. McNelis said in those states that allow it, stores are shackled because no banks will take their money.

While most candidates said they supported a new library for Santee, they had different approaches.

Trotter said “the million-dollar question is `How are we going to get there?” He said the library could be part of a planned new community center.

Minto said he has been talking about a new library for four years, and was the first to sign a petition supporting the effort.

McNelis said he was not supporting a library of the past, but only one that would include much needed services such as meeting room space, added computers and other new technologies. He said the cost (estimated by the Build a New Library Committee to be at least $15 million) must not be ignored. “If we learn to live within our means for once, then we can take care of it,” he said.

Herron also cautioned about a new library cost, stating the city should be “fiscally responsible, without saddling us with an abundance of debt."

Most candidates agreed that holding a special election to fill another council seat when either McNelis or Minto was elected shouldn’t happen because of the high cost.

“I can’t see spending $200,000 for an election for someone that will serve for only two years,” McNelis said, advocating for the council to appoint the new member.

Houlahan said he didn’t think they can put a price on democracy and proposed that the second place candidate for council takes the seat. Trotter said he’d go along with that proposal. However, the actual decision will have to wait until this election is over.

To a question on setting term limits for the council, all but one responded that he would oppose such limits, with most saying experience gained from multiple terms is valuable in doing a good job.

“Believe it or not, the job of a council member is not easy, and it takes a lot of experience to do a good job,” Minto said.

Houlahan wanted to see maximum terms of two or three, saying that long-term incumbents are more susceptible to the influences of developers and special interest groups “who can take things in the wrong direction.”