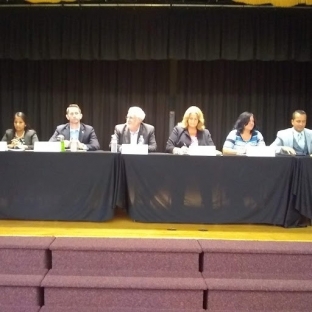 October 10, 2018 (Santee) -- The proposed Fanita Ranch housing project that would add nearly 3,000 houses to Santee is probably the most controversial issue facing city leaders. But at a candidates’ forum Oct. 9 at the Pride Academy School, three candidates for City Council including two incumbents declined to reveal their opinions about it.

Both Councilmembers Ronn Hall, running for District 2, and Rob McNelis, running in District 1, refused to say much about the massive project that developer HomeFed Corp submitted detailed plans to the city for earlier this year. The developer has been conducting an extensive outreach to residents to show what the project would look like, and how it would help solve traffic problems in the city.

Hall and McNelis said because they will be voting on the issue, they were prohibited from giving their opinions. Hall did say the developers “haven’t come forward with anything that I’m impressed with.”

Another candidate, Laura Koval, running for District 3, said she’s concerned about development like everyone else but that in the two-year term she aspires to gain, “it is unlikely any decision will be made on Fanita Ranch, and my focus is to fix the budget.”

The remaining four candidates, Evlyn Andrade-Heymsfield (District 1), Rudy Reyes (District 2), Zack Gianino and Lynda Marrokal (both District 3), all criticized Fanita Ranch as far too large, saying it would exacerbate already serious traffic congestion on city roads and use more services provided by the city than the city would receive in property taxes from the new development.

“I’m sick of Fanita Ranch, I’m opposed to Fanita Ranch,” said Lynda Marrokal, running for District 3. “I just feel that we’re putting too much stress on our fire department and our police department.”

Both Andrade-Heymsfield, challenging McNelis in District 1, and Gianino, one of three candidates in District 3, said the city’s current infrastructure cannot handle the influx of some 10,000 more people that would result from some 3,000 new houses. “It will absolutely make things worse the way things stand,” said Andrade-Heymsfield. “We need more responsible development that falls within the general plan.”

Reyes, challenging Hall in District 2, called the project “a rotten fish,” that puts everyone at risk because of the increased likelihood of wildfires, and the limited escape routes from the site.

The city’s outdated general plan was another subject that got mixed reviews from candidates. McNelis said part of the reason the plan hasn’t been updated since 2003 is cost, estimated to be between $150,000 to $200,000. Under the current plan, the council must pass amendments for specific projects, he said.

Many of those amended projects have spurred the ire of residents who say they are fed up with the council approving a higher number of units on parcels and changing previously zoned commercial to residential.

A citizens’ initiative that would have required any new development that increases density over the current general plan go to a public vote garnered enough signatures to be put on the ballot. However, the Santee City Council voted to conduct a feasibility study of the initiative which effectively delayed its implementation to 2020.

Andrade-Heymsfield said she was in favor of updating the general plan as soon as the city has the funds to do it. The candidates all agreed the general plan needs revising but Koval noted she wants to make sure that small businesses aren’t penalized by any revisions.

Traffic congestion, an ongoing sore point with most  Santee residents, generated different views. Andrade-Heymsfield said annexing a parcel of land near the SR 52 entrance at Mast Boulevard could help alleviate the daily backup at commute times. Adding a lane on Mast would also promote a smoother flow, she said.

Gianino noted that to truly fix the problems with the 52 would cost about $1 billion so the city needs to be creative. He said better synchronized traffic lights and ensuring public service vehicles don’t disrupt flow would help the situation.

McNelis ripped the proposed solutions, saying annexing the parcel would do nothing to solve the backups, and that CalTrans controls traffic signals so that idea wasn’t viable either.

Reyes said the problem and solutions concerning traffic rests with SANDAG, the San Diego Association of Governments, the public agency that controls regional infrastructure projects. “If we want to make changes we have to make our voices heard (at SANDAG),” Reyes said. He added that unfortunately, the incumbents on the council “have been sitting on their thumbs.”

Koval noted that 94 percent of Santee workers commute outside the city, so it will take a regional approach to solving the issue. Koval belongs to the Mayor’s Highway 52 coalition, which has hired federal lobbyists to secure funding for highway improvements.

One question concerning whether Santee should become a sanctuary city triggered a uniform reaction against it, although Andrade-Heymsfield qualified her answer by saying she had empathy for people coming here. She said two of her brothers were murdered, one in Honduras and one in Mexico, but gave no further details.

As to ways the city might improve its financial health, several candidates provided some innovative ideas. Reyes said the city should install large electronic billboards, and that three of these might generate some $500,000 annually in revenue. He also said wrapping city vehicles with ads could also boost funds to the city, as would renting out a newly- built community center.

Andrade-Heymsfield said the city should adopt a community choice energy plan which is an alternative to the power now provided by San Diego Gas & Electric. The plan would save money for both residents and the city because of lower rates the alternative plans charge, she said.

Koval said several times that as a director for the Santee Lakes Preserve (under the auspices of the Padre Dam Water District) she has balanced budgets, and helped to make that entity successful, increasing revenue and jobs at the award-winning park. Koval said Santee is now facing a budget crisis, and she had the past experience in finance to solve such problems.

Incumbents Hall and McNelis each said they have been working hard to improve Santee and had voted for job creating projects that enhanced the city’s coffers and improved its quality of life. McNelis said his experience and dogged efforts on behalf of his city was a dramatic contrast to his opponent, who is a relative newbie. “I did not just walk in the door and decide to run for City Council,” he said.

“We’re working hard for you, and I have the stats saying that I’ve served you,” Hall said.

Yet, the challengers had a much different view of what voters face in November. Reyes said the choice voters have is between “the same ‘old, same ‘old, and new ideas.”

Andrade-Heymsfield said she talked to many voters in her district who told her they weren’t being heard. “I’m here to be a voice for you, and will hear your voice,” she said.

Gianino also said there was a clear choice for voters: one where the city continues to over develop, leave its roads to rot, and allow SDG&E to continue to take advantage of residents, or another direction that puts “the rightful body back in charge, and that’s the people.”

Marrokal promised to be completely transparent in her dealings if elected. “I have 61 years behind me. What you see is what you get. And yes, there will be a learning curve for me.”

One Santee voter at the forum said he was interested enough to go to both public forums and was impressed by the challenging candidate in his district, now represented by McNelis. “I’m leaning to change,” said David Noe. “Sometimes someone new can do the job.”