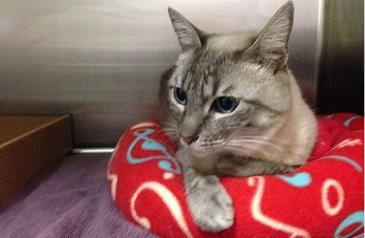 February 25, 2016 (Santee) -- Riding inside the car is one thing, but riding trapped inside the front bumper of a car for 8 miles was quite another for a cat from Santee.

The 5-year-old lynx point Siamese is still a bit jumpy at the County Animal Services facility in San Diego Thursday. Just the day before, he traveled just inches from the asphalt all the way from Santee to an area near Kaiser Hospital in Grantville. At that point, someone noticed the cat hanging head first out of the bumper and flagged down the driver.

She had no idea the animal had crawled inside the front end of her car. Bystanders took a crowbar to the bumper to free the cat and County Animal Services picked up the animal. One day later, the cat appears to be just fine other than still acting a bit nervous.

“If you park your car outside, tap the hood of the car or tap your horn lightly to alert any animals that might be looking for warmth from your car’s engine,” said County Animal Services Deputy Director Daniel DeSousa. “Tapping will scare them and they’ll run off.”

The Siamese was microchipped and found to live near the driver of the car. Animal Services has reached the owner, who was thrilled to hear her cat was safe. She plans to pick up her pet at the shelter Friday.