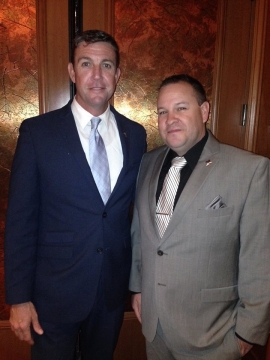 Trotter was nominated for the Person of the Year award by Rob McNelis, branch manager, Movement Mortgage. Trotter is an active member of the Santee Santa’s program, Santee Food Bank, Guardian Angels Church, Santee Parks and Recreation Committee, an appointed member of the Community Oriented Policing Committee and a founding and current member of Santee Chamber’s Santee Young Professionals committee. McNelis, who also serves on the Santee City Council, said, “Through Dustin’s personal efforts, many Santee families have received school supplies, food, and assistance to make their homes safe and functional. He has also spear-headed multiple community efforts to better the lives of Seniors and needy families by bringing others to work on and contribute to the food drives, back pack supply drive and bikes and balls dive.”

Also at the Chamber’s awards event, Mike Clinkenbeard, outgoing Chamber board chairman, was honored with certificates and proclamations from local politicians. In addition, Military Recognition Awards were presented to two groups that have been adopted by the City of Santee: United States Marine Corps (USMC) 2nd Battalion, 1st Marines Regiment, 1st Marine Division, based at Camp Pendleton which is currently on deployment and USMC Helicopter Squadron 462, also known as the “Heavy Haulers,” stationed at Marine Corps Air Station Miramar. Staff Sergeant Tyler R. Wilde was recognized for his outstanding performance while serving as a Quality Assurance Representative and Maintenance Controller for Marine Heavy Helicopter Squadron 462 throughout 2017.