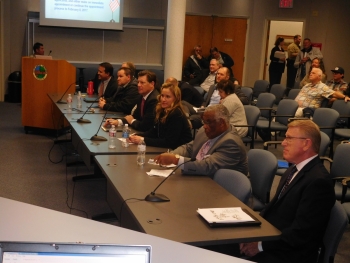 January 26, 2017 (Santee) -- Brian Jones, a former state Assemblyman and ex-Santee Councilman, is returning to his old job again. He was appointed by the City Council after a five-hour interview process that began last night and stretched into the early morning hours

Santee’s City Council voted 3-1 to appoint Jones to a seat left vacant when John Minto was elected mayor in November. The position has about two years remaining, and Jones said he plans to run for the state Senate seat now held by Sen. Joel Anderson who will be termed out in 2018. Jones recently stepped down from his Assembly seat due to term limits.

New Councilman Stephen Houlahan was the lone vote against Jones, who served on the Council from 2002- 2010. He nominated Jennifer Telitz, a radio sales executive, but that motion died for a lack of a second vote. 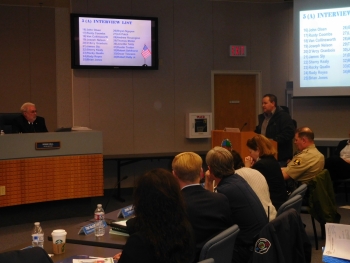 Another nominee, Dustin Trotter, a construction firm owner who came in second place behind Houlahan in November, also failed to get a second, preventing a vote on him.

Councilman Ronn Hall then nominated Jones, who was seconded by Minto, and then obtained the council majority vote. The other finalist in the lengthy process was Dawn Gibbs, a small business owner.

“Brian has the experience I think I need to have here,” Minto said before the final vote. He added that Jones has “the ability to get the work done without a lot of training.”

Minto and the rest of the sitting council members said they were most impressed by the breath of talent and the number of quality candidates who threw their hats in the ring. “There are a lot of smart people here,” Minto said.

While asking questions to one of the applicants, Councilman Rob McNelis wondered out loud why any of them would want to join the group, whose collective intelligence he mocked. “Why do you want this? You can literally lose IQ points by sitting up here with us.”

The interview process was conducted over about five hours, with each of the 34 applicants getting three minutes to make their case in the public forum. The original field was 41, but at least seven people dropped out.

In the latter rounds of questioning, the remaining candidates were asked about their stands on such hot button issues as new development, traffic, marijuana sales, neighborhood preservation, and how they might interact with state and federal governments.

More than a few of the applicants pointed out things that could be improved. John Olsen said citizen participation in government could get much better if council meetings were live streamed online. James Sly said the city could do a better job of attracting larger corporations to Santee. Those companies would fund infrastructure improvements such as a new library and roads.

Van Collinsworth, founder of the local nonprofit Preserve Wild Santee, said the city should look at changing energy providers to a community aggregation model instead of staying with San Diego Gas & Electric. The move would not only result in cheaper energy, it would allow the city to return any profits to city control and fund other services, he said.

Trotter made the point that of all the applicants he was the only one to run in the last election, and has spent countless hours observing the council and becoming familiar with all the issues affecting the city.

Yet, a majority of the Council seemed intent on appointing someone other than Trotter, and ultimately selected the ultimate insider in Jones, who is a commercial real estate agent.

In making his case, Jones underscored his extensive record as an elected official on both the City Council and in the Assembly. “What this comes down to is experience, track record and connections,” he said. “I can hit the ground running, and make the decisions on what’s best for the citizens of Santee.”

Jones will be sworn in at the next council meeting on Feb. 8.