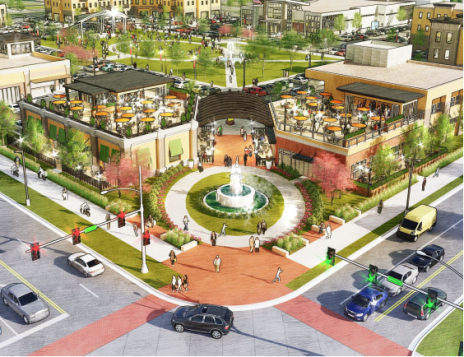 By Mike Allen
August 15, 2019 (Santee) -- Executing one of its priorities set last year, Santee’s City Council has approved the concept of an overlay zone to an area centered around Town Center intended to attract arts and entertainment-orientated businesses such as night clubs, galleries, museums, theater and dance companies, plus other tourist-centric enterprises including hotels.
The zoning change, if ultimately approved, would eliminate the need for additional reviews for qualified businesses and streamline the permitting process. It would also encourage the development of higher-elevation, mixed use (commercial and residential) buildings up to 55 feet.
Santee officials said they’re trying to create more synergies around two key projects that were already approved but have yet to break ground--the Karl Strauss Brewery and a combined movie theater and restaurant, as well as snag a new hotel.
Councilmember Ronn Hall said the city would like to trump what La Mesa and El Cajon are currently doing to attract visitors to those East County cities, with La Mesa’s Friday Farmers Market and the renovated Performing Arts Center in El Cajon, which opens next month as The Magnolia.
“We’ll outdo them someday,” Hall said.
Mayor John Minto said the idea behind the arts district is to provide an incentive to arts-oriented and recreational businesses to set up shop in and around Town Center and Trolley Square.
“We’re setting up an ability to be imaginative, to take a canvas and paint the arts and entertainment district we need,” Minto said.
While the council voted unanimously to establish the overlay zone, Councilmember Rob McNelis said he didn’t think the concept of higher density housing with fewer required parking spaces near the trolley station was smart. People aren’t abandoning their cars, and the new apartments will result in needing more parking, not less, he said.
“We’re putting the cart before the horse,” McNelis said. “It’s a great concept, but it’s just not reality.”
To further entice already approved projects, particularly the movie theater, to start, the council also approved forming a community facilities district (CFD) that could issue bonds to pay for needed infrastructure improvements such as streets, lighting and landscaping.
Similar CFDs have been used in other cities to finance these improvements, but not in Santee. City staff said they identified some $7.7 million in fees that could be financed through the CFD for three projects---the brewery, movie theater and hotel.
Eneract LLC, the developers of the theater/restaurant, were also granted a second amendment to its 2018 agreement extending the due diligence period to 15 days after it receives a determination from the state of California on the firm’s request not to pay its contractors’ workers the prevailing wage. Eneract told the city having to pay workers prevailing wages would increase the cost for the project by two to three times.
The Karl Strauss project, which was approved by the Council in December 2015, was supposedly back on track earlier this year after settling differences with Preserve Wild Santee, the environmental nonprofit. But there’s been no announcement of any groundbreaking, and the council was mum about what was going on.
As to the possible new hotel, the Council approved a change to a property behind the 24 Hour Fitness off Town Center Parkway called Parcel 4 as more suitable for a hotel, instead of its current designation as a library.
Through the development of Trolley Square, that parcel was planned to accommodate a new library for the city, but funds for that project were never set aside.
The news spurred an outcry by members of the Friends of the Santee Library, who said they never were aware that Parcel 4 was a future library site.
Pauline Kedward, a Friends member, said all the time she has been working on raising funds for a new library, the group was never told about the site.
“I feel blindsided,” Kedward said. “This was never mentioned as a piece of land designated for a library…What are we doing? What about the youth of Santee? Where are they going to hang out? At a sports bar?”
Three other Friends members also expressed opposition to changing the designation, but Council members were unanimous in stating there were better sites for a new library, including Fire Station No. 4, and a nearby property off Magnolia Avenue where the Santee Barn is located. The County-run library on Carlton Hills Drive is only 9,000 square feet, inadequate for a city the size of Santee, members say.
However, the main problem, Council members said, is always the lack of funds to build a new structure, now estimated at $25 million. County officials say they do not finance construction of new libraries for incorporated cities, but will pay for its maintenance and staffing.
Councilmember Laura Koval said if a hotel was built on the site it would render more TOT or room taxes for the city, part of which could be assigned to funding a new library.
That didn’t sit well with several of the Friends, including Lynda Marrokal who said she has been trying to get a new library for Santee for some 40 years. “I’d just like to see it built before I croak,” she stated.
After the meeting, McNelis said the city was negotiating with two different hotel developers for a hotel with about 100 rooms at the Parcel 4 site. He declined to provide the names of the developers.