April 29, 2013 (Santee)- Recently, a Coffee Corner benefit was held for Dylan Pourner, a kindergarten boy with brain cancer, in Santee. Organizers and students who helped out wore bracelets that said, “We Love Dylan…The greatest of these is love,” and “We Love Dylan” t-shirt.  A concert was also held. Now, local schools are pitching in to help raise funds to help Dylan and his family.

ECM interviewed Gina Milton, one of the organizers. She told us that Dylan has a glioma, a non-operable mass. “He lost control of his hands and he can’t stand. The tumor is on the brain stem. It keeps growing and putting pressure on his brain.” But there is hope; he started a new treatment a few weeks ago and is expected to be getting it for eight weeks.

Dylan has been getting a lot of help and support from the community. “Kids are doing fingerpainting and play[ing] music. He tells them what to do. There are six different schools involved- West Hills, Santana, Cajon Park Elementary, Hill Creek Elementary, Rio Seco Elementary, and Carlton Hills Elementary.”

Andy Cato, another organizer, added, “Students are coming together. They have a heart to make a difference. We want to keep it rolling, so that it helps families in similar situations. In summary, it’s students impacting San Diego.”

Other organizers for this benefit are Christina Gates and David Matranga.

Gina gave some background. “Project 25 is an urban youth collaborative that offered schools money. They were able to register four schools in East County. [The schools] were each given $100 to do what they want. It’s a competition.”

Gina’s daughter, Jennie, first approached her mom with the idea to use the money to help Dylan. Jennie heard about Dylan from the vice principal, Tylene Hicks, at Carlton Hills School, where she attends as an eighth grader. She is also the ASB Vice President. So, all the schools decided to partner together to help out Dylan. “No one cares about the competition anymore.” 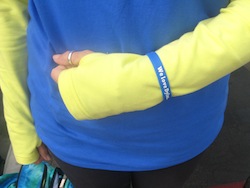 Milton adds, “Kids started selling bracelets.”  The bracelets read, “We Love Dylan…the greatest of these is love.” A week before spring break, Carlton Hills did a bake sale and raised $1700, Milton said.

Gina shared more details of Dylan and his family. “She’s a single mom- Jennifer. His father is Thom. He lives in North County. She lost her job last September because of Dylan’s health issues. She moved in with her parents after the diagnosis. He did a full treatment for eight weeks and an MRI, but there was no difference. [His mom’s] investing everything in him.”

People can also help by “continuing to follow the website on wordpress (see below) and make donations.”

Gina admits she and her family haven’t known Dylan for very long. “All this has happened in three weeks.”

Dylan came to the Coffee Corner to visit around 3:30, where the people there who have been supporting him, welcomed him. His mom also got to meet those supporters.

Q: How does it feel to have all this support from the community?

A: “It’s so heartwarming. It makes us feel supportive.”

Q: Where did you used to work?

Q: Gina mentioned you moved in with your parents?

A: “Yes, I moved in with [them] after the diagnosis because he was expected to have a full year of chemo, and his energy level would be low. My parents had room.”

Gates told ECM that they raised over $3400 and they expected a nice turnout for the concert.

Gates also mentioned that there aren’t any fundraisers at the moment. Ideas are just being thrown out for more personal fundraisers.

To learn more about Dylan and see a video, visit: http://santeeproject25.wordpress.com.

If you wish to make a donation, visit: https://www.giveforward.com/fundraiser/5nt1/dreamsfordylan.