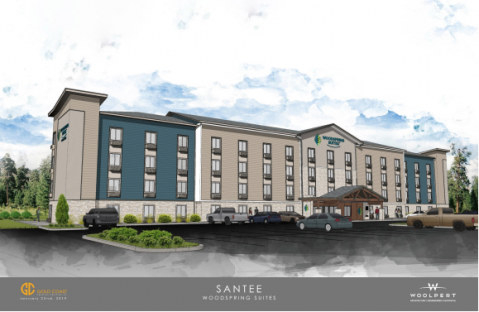 By Mike Allen
September 21, 2019 (Santee) -- Santee’s City Council approved a 122-unit extended stay hotel just west of the intersection of SR 125 and SR 52 on Mission Gorge Road at its Sept. 18 meeting.
The Council also heard an initial report from its contracted expert to help create a brand for the city as it attempts to boost its tourism and attract new businesses.
The hotel developers, Gold Coast Properties have selected the Woodsprings Hotel chain as the operator. The Council voted 5-0 to grant a conditional use permit for the building that should start construction sometime in the first quarter of 2020.
The Santee location at 8801 Mission Gorge Road will be the first Woodsprings property, although there are four other locations for the chain being built in Southern California, said Aaron Packard, director of development for Gold Coast Properties. 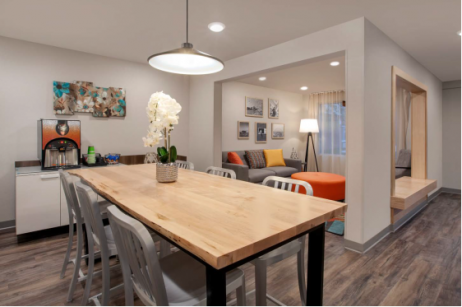 Packard said they selected the Santee site because of its prime location, and because the city needed additional hotel rooms.
While the hotel conforms to the general commercial zone that exists, at its apex of 49 feet, the building exceeded the height limitation for the site by nine feet, requiring a variance from the city.
In a public hearing before the vote, three people spoke in favor of the project, and three were opposed, including homeowner Adam Schultz, who said he was concerned about the light and noise pollution the hotel would create, as well as safety concerns.
Another nearby homeowner, Cody Falk, said the hotel would detract from the primarily residential neighborhood that abuts the property. “I get a negative vibe from this,” he said.
Lynda Marrokal, the previous owner of the two-acre lot where the hotel is going, spoke in support of the project, which she said will be an attractive addition as visitors travel into Santee from the west. She said if the Council didn’t approve the hotel, “You can count on a gas station along with a convenience store” to occupy the site.
Marrokal said her parents owned the lot since 1946, and had plans for it, but when the 125 freeway was built, selling it or developing it became impossible.
She shared that she and her brother, who inherited the site, had lots of squabbles over how the land should be used, and that his preference was for a gas station. “Now we’ll see something that we can be proud about,” she said.
Several Councilmembers said it would be nice if the hotel included solar panels on its gabled roof. Packard said his firm was seriously looking at doing that. 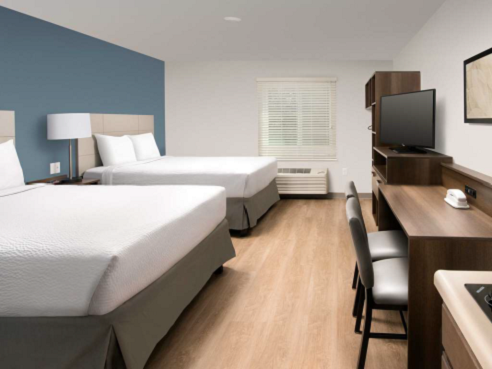 The hotel will include a kitchenette in every room as part of its catering to visitors using the facility for extended stays of up to 30 days. The hotel includes a fitness room and laundry room as well as 127 parking spaces and extensive landscaping.
In tandem with the new hotel decision, the Council heard from its hired consultant about a branding effort it undertook in March. The Council members determined they needed help in developing a brand to better market the city to attract business investment and visitors.
Ed Barlow, director of strategic planning for North Star Destination Strategies, presented findings culled from a variety of surveys, interviews, and focus group interactions in the past several months.
The findings were given more heft because of the 1,072 residents who took the survey, which Barlow said was well above average for a city the size of Santee. The three highest descriptions of the city identified by residents were: family-focused, close-knit small town feel, congested traffic, and up and coming/growing.
Many respondents gave the city high marks for community feel, safety, and ease of access. Yet some of the negative characteristics cited were hot climate, a perception of prejudice and trailer parks.
Among the more telling quotes that underscored why the Council hired the experts was this from a resident: “Our reputation is outdated. If you haven’t been to Santee in a while, it’s not what you think.”
The consultants will continue working with the city to develop its brand, a process that takes about three months. That includes creating a logo, color schemes, and a brand narrative.
Santee has allocated $80,000 for the branding effort, but it could spend another $12,000 if the Council decides to implement the final action phase.