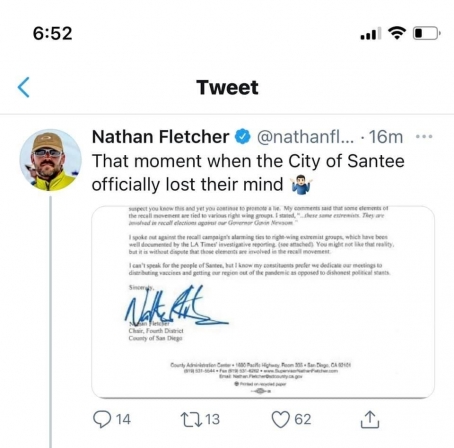 By Miriam Raftery
February 12, 2021 (Santee) – The Santee City Council voted 4-0, with one abstention, to condemn Nathan Fletcher, chair of the County Board of Supervisors, for “divisive language”  referring to backers of efforts to recall Governor Gavin Newsom.

The criticism stems from comments made by Fletcher in a Zoom call with Democratic party leaders after the violent Capitol insurrection in Washington D.C.  Fletcher stated, “There is substantial evidence that those who are leading this recall effort are linked and associated with neo-Nazi, with white supremacists, with right-wing militia groups, and we cannot stand for this here either,” the San Diego Union-Tribune reported. Fletcher did not criticize those who signed the recall petition, focusing on the movement’s leaders.

A letter signed by Mayor John Minto and sent to Supervisors criticizes Fletcher for characterizing recall leaders as “ extremists, conspiracy theorists, neo-Nazis, right wing militia groups and white supremacists. Hate has no place in Santee. Hateful rhetoric has no room in political discussions.”
The letter called for Supervisor Fletcher to publicly apologize to more than a million people who have signed the recall petition and to resign from the Supervisors.
Santee’s five Councilmembers are all Republicans. But one member, Santee Councilman Ronn Hall, abstained from voting, stating that he didn’t think the letter would accomplish anything, adding, “We’ll probably make an enemy, and probably more than one. They [Democrats] own the country and they’re going to do what they’re going to do.”
Far from resigning or apologizing, Fletcher tweeted the Santee Council’s letter with this remark:  “That moment when the city of Santee officially lost their mind.”
On Facebook sites devoted to Santee discussions, a few praised the Council’s actions, but many attacked it, noting the city’s long history of racism and a Councilmember, Dustin Trotter, who reportedly co-founded Defend East County (DEC), a group kicked off of Facebook after many racist and violent posts.
Michael Schwartz, executive director of the San Diego County Gun Owners, posted, “Santee City Council calls for Nathan Fletcher's resignation in an extremely well written letter! Thank you to all the Santee City Council members who voted for this.”
James Alan Jones wrote, “Does not agreeing with Newsomes [sic] agenda or like the way he's handling covid make you a White Supremacist?”
Daniel Balcomb replied to Fletcher’s post with this comment. “Sir, people want to recall Governor Newsom because of his failures. From the vaccine distribution to the billions given to prisoners to the rolling blackouts.”
But others lambasted the Santee Council’s actions as hypocritical.
Collin Cady wrote, “…they ignore plenty of constituents' calls and notes regarding the groups that actually represent hate and violence in Santee.”
Jason Houck stated, “What pointless action on the first question to recall a governor during a pandemic. Secondly this city council has not condemned DEC or any of the violent behavior in the city of Santee.”
Another poster wondered why the Council  asked for Fletcher’s resignation, but never called for Congressman Duncan Hunter to resign after he was indicted on federal crimes. (Hunter eventually pleaded guilty and resigned.)
During public comments at the Santee Council meeting, Mary Hyder asked why the Council never sent a letter to ask State Senator Randy Voepel to resign for his statement likening the deadly Jan. 6 Capitol attack to “Lexington and Concord.”
On Fletcher’s social media, Matthew, no last name, wrote, “Santee felt personally attacked, seeing how they’re the right-wing terrorist capital of San Diego County.”
Doug Porter wrote, “Klantee gonna Klantee,” a reference to its long history of racially-motivated incidents including shoppers in Santee recently photographed wearing a KKK hood and masks with swastikas, as well as violent altercations between racial justice protesters and counter-protesters, some wearing confederate flags as they taunted protesters and in some cases, waged physical assaults caught on video.
The city has taken some steps to address racial issues, including its recent adoption of a campaign promoting diversity, equity and inclusion.
But the reactions provoked by the Council’s letter serve as evidence that the city still has a long way to go to restore the public trust on racial equality issues. 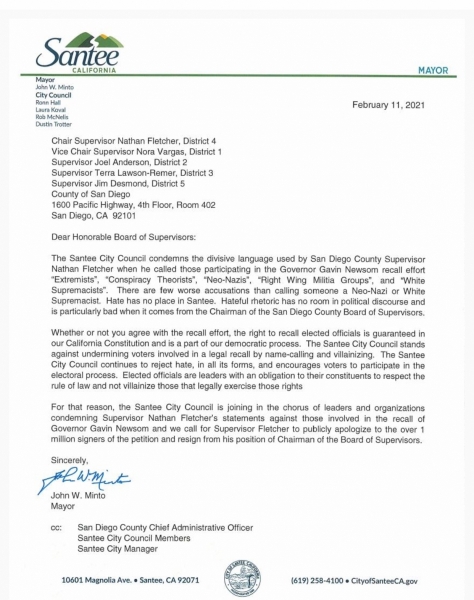 lives in santee!!
the klantee remark is directed at the city council and mayor and there stupid letter to the county. and the fact they did nothing when white supremist took over santee in the summer of 2020, claiming to be "helping".
Please you liberals and people that haven't live there long are implying Santee is more racist then what it really is. If it was as racist as you all want people to believe, there be attacks on people everyday, there's a church that is Koreans and blacks but it's never vandalized, people like you make Santee look bad as well as some cc members
https://www.eastcountymagazine.org/social-media-erupts-over-photos-shopper-wearing-kkk-hood-santee
8east so true! and a waste of money.
In my opinion, from what I have seen, these Trumpians accuse the Democrats of some infraction as a cover for doing it themselves. They accuse Democrats of "cancel culture" when they started things by trying to cancel everything Obama did. This recall effort is just another cancel culture attempt to to promote Trumpism. It really has nothing to do with what Newsom has done.
Republicans projecting their sins on others is frankly, not just easily documented but really in many ways the platform of the party. Remember that they have not bothered with an official platform in either 2016 or 2020, because having actual positions, said out loud, is inconvenient when something much uglier is the party zeitgeist: white supremacy. The double game of denial and/of violence is basically all they are now. We all watched this on TV this past Jan 6th, and saw the same in the recent vote to acquit Donald Trump. Nevertheless expect someone to project their own violence by sputtering "Antifa!", as if these loosely organized small groups have anything to do with Democrats. (Antifa is barely a group btw, because as anarchists do not believe in organizing groups larger than 5. Who, yes, sometimes beat down a Proud Boy here and there. Violence is not the solution, save self defense of course. Acquire a firearm and keep it at home my libs!) So democrats are slowly growing a little backbone, getting over their historical Stockholm syndrome. And good on them for growing past the Blue Dogs like the Clintons, Gores and Manchins who have led them through whole generations of losing! That new fortitude, the confidence of a younger generation's demographics, these alone are enough to secure Republicans place in the dustbin of history. But what will Democrats do for working people? A story to be told! Because Dems, for better or worse, control the government nationally, not to mention in the states who produce the wealth. The future is Dems to lose, and obviously they have been more than capable of pissing it all away it in the past. I think the younger Dems who are taking control of the party understand this, and are on top of their game. Newsom has not been an effective governor in many respects, giving back all of his leadership on Covid by bending to the hospitality industry he is part of. But he is good on other things, and probably most Californian's yawn in annoyance at the recall and vote for the gray, uninspiring product of a slightly older generation. And that is where we are. Democrat half measures and the familiar incremental progress of liberal democracy. Three steps forward, and two back, etc.
In my opinion, from what I have seen, these Democrats accuse the Republicans of some infraction as a cover for doing it themselves. They accuse Republicans of "cancel culture" when they started things by trying to cancel everything Bush did. This impeachment effort is just another cancel culture attempt to to promote Socialism. It really has nothing to do with what Trump has done. Funny how that works, huh?
remember Jan 6th 2021? that is what the retrumplicans have turned into!