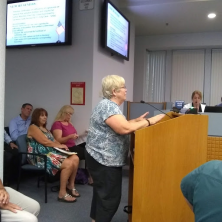 August 9, 2018 (Santee) -- Voters in Santee hoping to have more say in future development projects will have to wait two more years to do so, following the City Council’s vote last night to prepare a report on the initiative’s possible impacts instead of putting the issue on the November ballot.

In a two-hour hearing Aug. 8 before an overflow crowd at City Hall, the Council voted 3-1 to prepare a report to be completed within 30 days. That effectively prevents a public vote in November because there isn’t enough lead time for a campaign, said City Attorney Shawn Haggerty.

If the council decides, it could hold a special election in December but given the city’s strained budget that seems unlikely. The next general election is November 2020.

Voting for the motion made by Vice Mayor Rob McNelis was Mayor John Minto and City Councilman Ronn Hall. Councilman Stephen Houlahan, who co-chaired the initiative campaign, was the lone no vote. Councilman Brian Jones was absent.

An earlier motion by Houlahan to put the initiative on the November ballot died for a lack of second.

Called the Santee General Plan Protection Initiative, the measure would amend the city’s general plan by installing language to require that any new development with a higher or changed use than what currently exists in the plan to go to a public vote.

Initiative backers said in recent years the council has granted higher intensity uses on a number of projects, which has increased already heavily congested streets and highways in and around Santee.

“We don’t need any more houses,” said Pam Kerzner. “Today it took me 22 minutes to go from Medina Drive to the 52 on- ramp, and school hasn’t even started yet.”

Looming over the proceedings, referenced by several of the 17 speakers before the council vote, was a proposed 3,000 unit residential project called Fanita Ranch in the city’s northwestern quadrant. Developer HomeFed Corp. has submitted its specific plan to the city and is preparing an environmental report.

Ten speakers advocated to put the referendum on the November ballot, while seven, including several representatives from the construction industry, said the issue deserves a more in-depth study about its possible impacts.

Houlahan said the initiative isn’t about any specific project, but simply giving voters the right to weigh in when a project asks for increased density, or up-zoning.

“You’re voting for the right to vote,” he said. “There’s a huge community of people who want their quality of life to stay the same.”

McNelis said the referendum was falsely pitched to residents as a way to fix Santee’s traffic problems and to stop Fanita Ranch when it cannot accomplish that. Adopting this over-reaching measure would put the city at risk of being sued by the state of California because Santee would not be complying with laws covering minimum housing starts, he said.

Without the revenue streams that new development generates, Santee won’t have the funding to address its traffic issues, McNelis said. “We’re not going to get rid of traffic (entirely),” he said. “But we can do things to offset those impacts, and we need developer money to do that.”

Minto argued that under the proposed change to the General Plan, businesses considering coming into the city may look elsewhere if they must pay for a special election for their project to get approved, or face delays caused by a required vote at the next general election.

“This isn’t just about housing. This is about business….We need to have revenue here,” Minto said.

Yet Houlahan wasn’t buying the argument, saying the city has had budget shortfalls since 1998, and seems to have survived. “Is our only hope that we build on every morsel of land….and completely sell off our quality of life?” he asked.

Santee’s council vote to conduct an analysis rather than putting the referendum to a public vote caused several in the packed chambers to boo. One pro-initiative speaker, Rudy Reyes, yelled out that would be challenging Hall for his District 2 seat this November, and asked for challengers to unseat McNelis in his district.

Both Hall and McNelis, whose seats are up for election this November, were unopposed as of last week. This Friday, August 10, is the last day to file to run.

At the meeting Reyes said the council needed to stop wasting everyone’s time, and put the initiative on the November ballot.

Reyes said he’s run for public office at least five times previously, including for Santee’s council, mayor, and against County Supervisor Dianne Jacob in 2016 when he got some 36,000 votes.