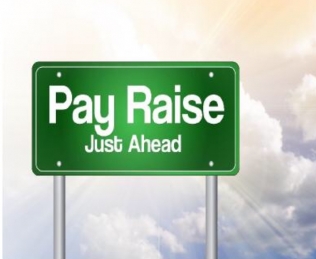 That vote, which was 4-1 with Councilman Stephen Houlahanopposed, followed an uncomfortable period stemming from the time when the Council first visited the issue and rumors began flying that elected officials were trying to enrich themselves.

The Council unanimously agreed that kind of pay hike was flattering but didn’t make any sense. It asked staff to come back with options, and made it clear it wouldn’t take any increase above the rate allocated to city employees, or 2.5 percent.

At the Aug. 14 meeting, the Council approved a package that gives Council members a 2.5 percent raise for the rest of this fiscal year, plus a technology allowance that equals 2.5 percent for the 2020-21 fiscal year.

The initial raise comes to $42 a month for Council members, bringing their monthly salaries to $1,728. The mayor will receive a $71 raise to a $2,193 monthly salary for the remainder of this fiscal year.

The technology allowance in the next fiscal year will be $50 for Council members and $80 for the mayor.

The Council members also will receive a hike in their gas allowance, $10 more for Councilmembers resulting in $360 per month, and $50 more for the mayor, resulting in $400 monthly.

Combined with the increased gas allowance, Council members are now getting $2,088 monthly, and the mayor gets $2,593 monthly.

The technology allowance was suggested by Councilwoman Laura Koval, who said she was spending more on her smart phone. The stipend can be used for any type of technology an elected official needs including a smart phone, laptop or tablet. It’s common for officials to have a separate phone and laptop for city business, said City Manager Marlene Best.

Houlahan said he was uncomfortable taking any raise given the uncertain financial future the city is facing. “I think the City Council should take no raise. I know the city is coming into difficult financial times…This is more of a symbolic gesture,” he said.

Houlahan’s motion died for a lack of a second vote.

There was also discussion over abolishing the Salary Setting Advisory Committee. The Council was advised by its attorney that the Council has a standing direction to convene the committee every two years, but is under no requirement to do so.

Mayor John Minto said he was against abolishing the committee. “We can’t get rid of it because I don’t want to pay the price for another election,” he said.

The Council agreed that making such units, typically garage conversions to living spaces or smaller units located on an existing lot, would help families, and provide much needed affordable housing.

The Council was told there was only one ADU currently pending. But Houlahan said there were likely other ADUs that never applied for permits.