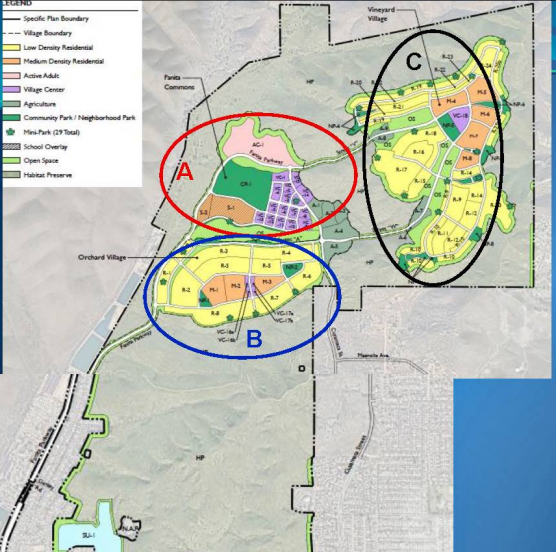 May 3, 2019 (Santee) -- A workshop describing the controversial Fanita Ranch proposed master-planned community will be held during a regularly scheduled City Council meeting on Wednesday, May 8th. The workshop is designed to provide information to the public about the project. No actions on the project will be taken at this meeting.

This meeting will be held in Santee City Council chamber, 10601 Magnolia Ave., Building 2, starting at 7 p.m.

Santee is currently processing a development application for a master planned community in the Fanita Ranch area with up to 2,949 housing units with a school, or 3,008 units without a school, up to 80,000 square feet of commercial uses, parks, open space, and agriculture uses.  The location of and the proposed site plan can be viewed using the links below.  The applicant is proposing a General Plan Amendment and a Specific Plan to designate the Fanita Ranch Project Specific Plan (SP).

A citizens initiative sought to require voter approval of Fanita Ranch or other projects that don’t comply with the existing general plan, but the Council voted to postpone that initiative until 2020 pending a study.

The project and became a key focal point in the 2018 candidate debates, with unsuccessful challengers warning that councilmembers could attempt an end-run around voters by approving the project before voters can have an opportunity to vote on the project.

Prior to the currently proposed Fanita Ranch Project, the most recent application for development on the project site was filed in 2005.  At that time, a Tentative Map and Development Review Permit application was submitted to build four villages containing 1,380 single-family dwelling units, 15 live-work units, commercial and mixed use space, parks, and open space.  The City Council certified the Final Environmental Impact Report (“EIR”) under the California Environmental Quality Act (“CEQA”) and approved the project in 2007.

The CEQA process includes several opportunities for members of the public, agencies, and Native American tribes to provide input on the draft Revised EIR and the modified Fanita Ranch Project prior to City Council’s consideration of the proposed Fanita Ranch Project.  Once the application was deemed complete, the City issued a Notice of Preparation (“NOP”) for the draft Revised EIR.  The NOP can be viewed using the link below.

The City is in the process of preparing a draft Revised EIR evaluating the modified project and specifically addressing the portion of the prior environmental analysis for the project approved in 2007 that was found inadequate.  The Revised EIR will address the environmental issues identified in the NOP.

Once the draft Revised EIR is complete, the document and supporting technical studies will be available for a 45-day public review period.  At the completion of the 45-day public review period, the draft Revised EIR will be finalized.  The City Council will consider the Final Revised EIR in determining whether to approve the modified Fanita Ranch Project.  A diagram of the EIR public input process is provided using the link below.

The project location map can be accessed here.

The project land use plan can be accessed here.

The 2009 Revised EIR can be accessed here.

The Notice of Preparation can be accessed here.

The EIR Public Input Process can be accessed here.

If you have any questions or comments regarding the Fanita Ranch project, please contact the project planner:

It's going to be so nice to camp at the lakes with thousands of cars whizzing by all day and night; it will be so tranquil and relaxing, I can't wait.
San Diego county needs many more homes built to ease the high cost of housing. Same goes for affordable apartments.
The only problem I have with it, is the expansion of Fanita Parkway, that will turn into a 4-lane thoroughfare with a lot of traffic and pollution, in an area surrounded by parks, campgrounds, trails and "protected" land. Why not just extend Carlton Hills Blvd and Cuyamaca instead? They are already set up to handle high traffic, and will not require widening or expanding.