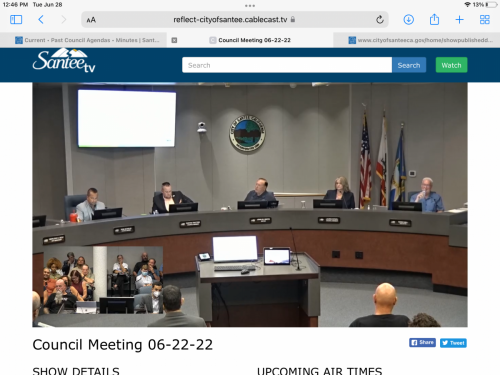 June 28, 2022 (Santee) -- While members of the Santee City Council say they adamantly oppose marijuana use, they also can’t ignore the escalating tax dollars other cities are reaping from the sale of the drug.

At its most recent meeting last week, the Council looked at a number of options it could take to regulate cannabis businesses and then tax those sales to yield dollars for other city needs.

In a lengthy and confusing discussion about the issue, the fifth public meeting it’s held dating to last year, the Council delayed making any decision and asked its legal advisors to return in July with some more defined options.

Given the cross talk, Santee will likely adopt an ordinance defining what type of cannabis business can operate in the city and establish a tax rate that could range from 4 to 12 percent, most likely at the lower end.

Vice Mayor Ronn Hall continued to push the city to set the tax rate as high as legally possible. “They’re (cannabis retailers) making a lot of money,” Hall said. “If you guys are going to do this, let’s stick it to them. Let’s go to 8 percent for retail.”

Councilwoman Laura Koval said the city should be careful about restricting the city’s options in the future, and use a process called a community benefit agreement. That law, a development agreement with individual owners, would give the city more flexibility in dealing with businesses and making changes if needed, she said. The process wouldn’t require a public vote.

Several members said holding a public election, which is required for collecting new taxes, would be too costly. However, Mayor John Minto said he wasn’t concerned about the cost, which would likely be recouped from a day’s worth of cannabis sales.

City Attorney Shawn Hagerty said he would bring a range of options back for the Council to consider that would include both the community benefit agreement and a tax measure for a public vote. To qualify for the November ballot, the Council has to adopt a measure by early August.

As they have at earlier workshops, the majority of residents speaking at the hearing urged the council to reject anything to do with marijuana. Most citied evidence and statistics that show cannabis leads to more extensive drug use, addiction, and generates more crime.

Yet the fact remains that while cannabis remains illegal by federal statutes, it’s legal in California, and many cities are bolstering their revenue intake by controlling its sale and getting an increasing share of those sales.

City Finance Director Tim McDermott estimated revenue from a retail store was about $3.5 million annually. Since the Council has already signaled it would allow four retail locations, that would mean the city could collect about $840,000 if the city imposes a tax of 6 percent on total sales of $14 million.

In other actions, the Council approved its 2022-23 operating budget for the fiscal year beginning July 1. Santee’s general fund budget shows revenue increasing by 2.5 percent to $54.3 million, and expenditures rising 4 percent to $53.4 million, resulting in a net gain of $791,000.

That’s after setting aside about $1.2 million into reserves. By the end of next fiscal year, the city’s general fund reserve balance would stand at $12.3 million, or 23 percent of expenditures. That is above the city’s policy of keeping reserves at a minimum of 20 percent of spending.

Santee’s two biggest generators of tax revenue, property taxes and sales taxes, are projected to rise next year but due to economic uncertainties, the sales category could be much less than in past years, McDermott said.

Santee is helping its 138.5 full time equivalent workers deal with increased inflation and higher prices by providing them with a 5.5 percent raise. The budget includes salary hikes of 3.5 percent for all employees, as well as a special stipend of 2 percent, paid out in two installments.

Minto praised the city’s workers, and said they were a big reason behind the generally positive comments he hears from residents about the city.  “The rank-and-file workers do one heck of a job….We got a ways to go but are further along than most other communities because we have employees who care.”

The budget was adopted on a 4-1 vote with Councilman Dustin Trotter opposed. He attempted to persuade the council to move some $300,000, mostly from the city manager’s budget, towards paying for some of the city’s planned capital projects, but was unable to attract any support from colleagues.