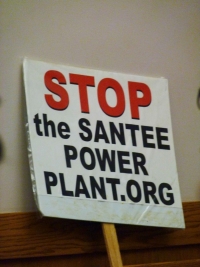 Project applicant Cogentrix, a  Goldman Sachs company, has stated that the facility would provide power during peak demand periods, up to 43% of the time.  The location was chosen due to proximity to a natural gas line and power lines that would feed power into the grid for SDG&E.

The Council passed a resolution that will be sent to the City of San Diego and the California Energy Commission voicing opposition to the plant due to its impacts on the Santee community, though the property itself is not in Santee and the Council has only an advisory capacity.

“The deck is stacked against local communities when it comes to utilities” Mayor Voepel told a crowd of 150 people, U-T San Diego reported.

Only Cogentrix spoke in favor of the project.  Dozens submitted speaker slips opposing it and speaker after speaker rose to object to siting a plant that can pose fire hazards, generate noise and emissions problems, traffic issues, and despoil the natural beauty of the area.

Councilmember John Ryan said he couldn’t remember another project on which “no one can be found that’s in favor” in his 27 years on the Council, Santee Patch reported.

Councilman John Minto suggested the facility could count as a “public nuisance.”

Lori Ziebart, representing Cogentrix, said the company’s experts will “leave no stone unturned” to address issues, pledging, “We are here to work with you and the community to try and do the right thing.”

A key hurdle for the project will be considered April 26 at the San Diego Planning Commission’s meeting, when planners will weigh whether to change the site’s zoning from open land to industrial use.