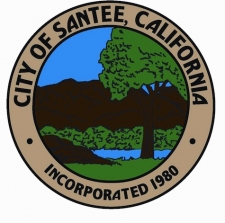 December 14, 2012 (Santee) -- The city of Santee dedicated on Tuesday, December 11 a 107-acre open space parcel along the San Diego River as a future public trail and parkway at a ceremony located at the 9600 block of Magnolia Avenue.

The event marked the transfer of the property from private to public ownership, a project spearheaded by the San Diego River Conservancy that was four years in the making.

Santee envisions developing a multi-use trail with interpretive signs and other public amenities along the riverfront parcel. The property stretches from Magnolia Avenue to the city’s eastern boundary near the Lakeside Baseball Park.

The acquisition of the Walker property will fill a key gap in the San Diego River Trail system, allowing Santee to add another 1.3 miles to the 2.4 miles of riverfront trail it has already completed.

The Walker Trail segment is included in the city’s 2013-14 Capital Improvement Plan. Completing the riverfront trail is a primary objective of the Santee General Plan and a major component of the city’s draft Multiple Species Conservation Plan.

“This was a complicated, multi-agency transaction with a lot of moving parts,” said Bill Maertz, Santee’s Director of Community Services. “We owe the San Diego River Conservancy’s board and staff a debt of gratitude for delivering this magnificent riverfront property to Santee’s park and open space portfolio.”

The riverfront parcel was purchased for its appraised market value of $2,140,000.

Acquisition funds consisted of grants of $1,200,000 from the State Coastal Conservancy, $856,000 from the U.S. Fish and Wildlife Service, and $84,000 from the State Wildlife Conservation Board. The property was targeted for preservation by the federal Fish and Wildlife Service because it contains high-quality habitat that supports at least three federally-protected bird species: the Southwestern willow flycatcher, the California gnatcatcher, and the least Bell’s vireo.

The Trust for Public Land, a national nonprofit land conservation organization, negotiated the terms of the purchase and coordinated the acquisition with the funding partners and the Walker family, which had owned the property since 1926. At one time, the Walker family owned 350 acres in eastern Santee and operated a farm and dairy on the south side of the river. To acknowledge the family’s legacy, this portion of the riverfront route will be named the “Walker Trail.”

“Our mission is to protect land for people, and this project is a great example of that,” said Sam Hodder, California director of The Trust for Public Land. “It will be at the heart of a trail along the San Diego River and will be a wonderful place for people to enjoy the outdoors."

The property has been used since the 1950s as a commercial sand mining operation. The current leaseholder, RCP Block & Brick, began sand extraction at the site in 1970. The company no longer mines sand from the site, but instead uses the western portion to stockpile various types of aggregate. As a result of the sand mining, the property contains approximately 30 acres of open water ponds.

Under a reclamation plan approved by the city in 1990, RCP Block & Brick has restored approximately 70 percent of the riverbed and will continue that work until the firm’s lease expires.

The city of Santee, which has agreed to take over maintenance of the property, will also receive $245,000 of the grant funds from the State Coastal Conservancy for design, environmental review, and permitting for the development of the multi-use trail.

The site will be maintained by the city’s public services division with assistance from a committed network of community volunteers.

“This conservation project demonstrates the effectiveness of partnerships between nonprofit groups and government,” Mike Nelson added. “It shows that great things can be accomplished when we commit to a common goal and all pull in the same direction.”

Agreed. Hope the rest of the river can be saved.

YAY!   :D   THANK YOU to everyone who helped make this happen!   I live in the City of Santee and already enjoy walking and biking the areas that have public access.   Can't wait for the whole River to be accessible to the public!   What a GREAT vision with GREAT cooperation!