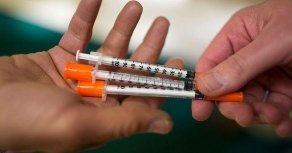 At its Feb. 24 meeting, Mayor John Minto steered the Santee City Council away from drafting a letter to the County Board of Supervisors opposing the program, which Supervisors approved on Jan. 26 by a 3-2 vote, resuming a program that had been banned for 23 years.

County Supervisor Joel Anderson, whose Second District includes most of East County, sent the Santee Council a letter following the board’s action dated Feb. 5, asking  whether the city would take an official stance on the program. Additionally, he requested the councilmembers’ personal attitudes on the program.

Councilman Dustin Trotter made his feelings clear, saying “My position is that I do not believe we need that in the city of Santee…There are better places to put such a program.”

Yet Minto, a former San Diego Police detective, sought to take a more measured approach, saying the city needs more information about the scope of the program, where the highest concentration of the targeted clients resided and where the program might have the biggest impact.

Citing his experience as a police officer, Minto said needle exchange programs don’t always cause problems in a neighborhood, or result in higher crimes. In most instances, patients simply want to get in, return used needles, and get new ones, he said.

“This (Santee’s request for added research) doesn’t mean yes, we want it, or no, we don’t want it,” Minto said.

Two residents speaking at the virtual Council meeting supported the needle exchange program as one that could mitigate drug use, and address the problem of used needles being discarded in public spaces, as well as reducing the spread of disease.

Resident Steve Stelman said Anderson’s outreach was done to fortify his no vote on the issue (North County Supervisor Jim Desmond cast the other no vote), and to prevent the program from being located in Santee. “This is a NIMBY issue--not in my backyard,” Stelman said.

Councilman Rob McNelis said while he didn’t believe the program decreased drug use, he agreed to obtain more information before deciding whether to support having such an office in the city.

Councilwoman Laura Koval and Councilman Ronn Hall expressed similar desires to have more information about the program, prompting Minto to say a consensus was reached to bring back the issue at a later date.

The Santee Council also voted to amend its 2020-21 budget to reflect an increase in total revenue by $5.7 million for the fiscal year that ends June 30, bringing the city’s total General Fund budget to $52 million.

City Finance Director Tim McDermott said a combination of stronger sales taxes, increases in property taxes, and savings from staffing and program cuts installed due to the pandemic all resulted in the higher than anticipated revenue surplus.

“There’s some positive news,” McDermott said. “The ultimate impacts of the pandemic have yet to be seen. So far we’ve survived it much better than we expected, but we’re not out of the woods yet.”

The biggest contributor to the increased revenue amount was higher than estimated sales taxes as a result of much greater purchases of goods and services via online channels. While Santee gets a nicer return on sales made at local stores, with so many folks were ordering things online during the shut down, the city benefited enormously from that activity, McDermott said.

Santee’s taxes from online sales collected by the county amounted to $1.6 million in 2018, but for this fiscal year it will be about $3.4 million, he said.

The city also gained new funds in the form of one-time infusions including a signing fee of $1.75 million paid by Waste Management for its renewed contract as the sole trash removal service in Santee; about $824,000 from federal allocations through the CARES Act to reimburse cities for responses to the pandemic; and federal and state reimbursements of $664,000 because of the city’s fire department employees combating various wildfires in the state last year.

Among the proposed uses for the increased surplus that the council will consider are enhancing the reserve balance; increased pay downs on the city’s pension liabilities; and additions to the capital improvement program. The Council will discuss the city’s goals and priorities regarding the 2021-22 fiscal year budget next month in a series of workshops leading up the new budget adoption before the end of June.

Let's get infrastructure done. Do Republicans and Democrats disagree on transportation? At least let's fix bridges, dams, highways, rail, ports and schools. Invest in renewable energy. It equals jobs, safety and American competition in global skills economies. Of course it does nothing about the death of this generation's children. But why does that even matter? Throughout most of the temporal history of humanity 45 years was old age! So of course you don't care, good enough for YOUR kids. But there is still the short term bet on maintaining some of this society until the permafrost belching carbon kills 99 out of 100 of us. A few of your children will survive you, place your bets and maybe your kids will remember you well?
our streets get repaired? streets like mast are falling apart and feeder streets have large cracks.