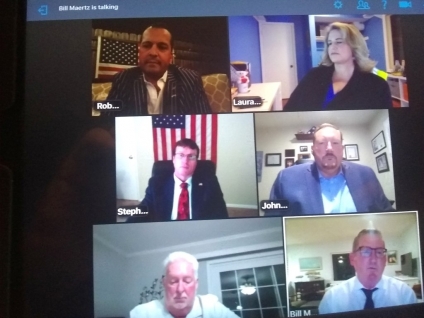 The revised law that passed unanimously April 8 prohibits landlords from evicting both residential and commercial tenants from their leased quarters for nonpayment of rent if the tenant proves they are unable to pay rent “due to financial impacts related to COVID-19.”

Councilman Rob McNelis, who cast the sole vote against a residential eviction moratorium earlier this month, said he supported the amended law, which incorporates language adopted by the state of California, because so many small businesses that have shut down to comply with the state’s directives during the pandemic response deserve some help.

He said legal protections already on the books make it nearly impossible to evict residential tenants for at least eight months, but little or no protections exist for commercial tenants.

But McNelis asserted the temporary eviction moratorium, which is in effect through May 31, is not intended for businesses that are still operating and doing okay during this crisis.

“This is supposed to be a safety net, not a way for somebody to not pay their rent if they can,” he said.

Rent forgiveness--even for negatively impacted businesses--isn’t permitted in the law. Tenants are required to notify landlords they are unable to pay their rent before it’s due or within at most seven days of the due date, according to the law.

Some councilmembers were confused by the language regarding the 30 percent decrease in income, asking what the time frame for the comparative decline would be.

City Manager Marlene Best said the normal comparison from the prior year’s month would apply, although it could be another period if the business wasn’t operating for at least a year.

California Gov. Gavin Newsom enacted an executive order March 27 installing a moratorium on evictions of tenants impacted by COVID-19, but he left it up to the state’s local jurisdictions to define how commercial tenants might be accommodated. As of April 8, only six cities and San Diego County enacted eviction moratoriums of commercial tenants during this crisis, including La Mesa and Poway in the inland region.

Santee’s City Council convened for the second time using teleconferencing technology with the five members located in remote places, likely their homes. Unlike the previous council meeting, this one had problems involving the audio, causing a nearly half hour delay before the start.

When the scheduled minister who does the invocation couldn’t get online, Mayor John Minto pinch hit and gave the prayer. He asked the Lord to provide protection and blessings for the nation’s first responders, particularly all the health care workers on the front lines of the war against the pandemic.

In other actions, the Council approved a third amendment to the contract for website development and hosting with Granicus LLC. The three-year extension, approved by a 5-0 vote, will cost the city $68,406.

Several members were critical of the prior contractor, Vision Technology Solutions, which was acquired by Granicus in 2018, as deficient. “We can’t even put our brand on this stupid website,” said Councilman Ronn Hall, who also asked the new vendor to provide the Council with the ability to live-stream the Council meetings.

McNelis said the cost for the extension was too much given the lousy performance by Vision, and that the city should demand Granicus demonstrate what they could do before committing to a multi-year contract.

He also said the city needed a more robust website that could provide information during times of emergencies.

Councilman Stephen Houlahan noted that while he hated to spend so much, the fact is the city’s website has become the de-facto “front door,” and requires this type of investment.

The Council also unanimously approved amending an earlier contract with Countywide Mechanical Systems for HVAC repairs to two buildings for an additional $4,555 to bring the total contract to $29,652.