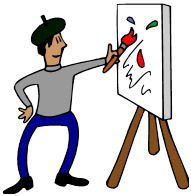 March 15, 2013 (Santee) - At Wednesday’s city council meeting, the council was informed of a Santee Public Art Sub-Committee under the Santee Park and Recreation Committee. Community services director Bill Maertz explained that the new sub-committee hopes to have public art projects and paintings among other things to promote works of art, such as depictions of nature. “We’re looking at proceeds from the Bluegrass Festival, volunteer painters, and donations from public” along with anyone else who may offer their skills and expertise, he said.

James Dreisbach-Towle from the Santee Parks and Recreation Committee was the only to one to speak. “I’m here in full support of the item. You see other cities having boxes painted. What we propose to do is have a sub-committee review boxes, murals.”

Councilman John E. Dale asked City Attorney Shawn H. Hagerty, “Do we need a formal policy in regard to public art and promoting?”

Hagerty replied, “The sub-committee will have guidelines for you. It would be consistent with legal requirements. We think the guidelines here are consistent.”

Councilman Rob McNelis clarified, “I understand this does cut down on graffiti. I think I heard that in Poway. Is that correct?”

Mayor Randy Voepel asked City Manager Keith Till, “The council does not need to do a vote. Is that correct?”

Till answered, “That’s correct. It’s in file; no action needs to be taken.”