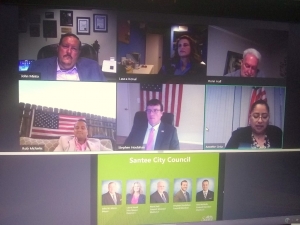 April 24, 2020 (Santee) -- Santee is getting $162,000 as part of the federal government’s $2 trillion stimulus package approved last month to help offset the devastation wrought by the COVID-19 pandemic.

The aid comes from the $150 billion portion of the Coronavirus Aid, Relief and Economic Security (CARES) Act aimed at helping the states, counties and cities in responding to the coronavirus. This is the same law that included one-time payments to most tax-paying Americans of $1,200 among a wide variety of economic relief programs intended to mitigate the upheaval caused by the pandemic.

At the April 22 Santee City Council meeting during a discussion of a grant application for federal community development funds, management analyst Bill Crane said the city’s share from the CARES stimulus would be $162,104, which would likely be delivered by June. The city might also use another $85,000 from an earlier federal grant allocation for responding to coronavirus issues, he said.

Santee City Councilmembers, who met for the third consecutive time via a teleconferencing technology that drew 33 viewers and three telephonic listeners, didn’t comment at all on the relatively minor amount that might not even cover city firefighting overtime expenses for a week. A staff report on the item said the Council would review the recent allocation in May.

In remarks at the end of the meeting, Mayor John Minto inferred that the city could soon take some baby steps in reopening some non-essential businesses that have been closed for about a month. “The law is clear about what the Governor can do, and what the county health officer can do,” he said. “We’re looking at ways we can work around some of these things.”

Minto added that May 1 is a “magic date,” and that some of the current restrictions now in place might be relaxed, but gave no details. He said Santee joined a coalition of other East County cities so that they are all on the same page.

Councilman Rob McNelis said the city should be working closely with its many small businesses and “do whatever we can do to get them open as soon as possible.”

Taking a different tack, Councilman Stephen Houlahan said he’s been focused on the city’s at-risk and vulnerable population, particularly the elderly residents of the area’s nursing homes and mobile home parks. “Now, more than ever, we need to double down and protect these individuals,” Houlahan said.

According to an April 20 letter by Minto on the city’s website, as of that date there were 24 confirmed cases of COVID-19 in Santee, but as of April 22, the city added  two more confirmed positive cases, according to San Diego County. Countywide, 96 deaths are reported by health officials as of April 22.

In other actions, the Council amended its fees covering the playing of disk golf at the newly remodeled Mast Park and fees for fire inspections. The disk golf course is scheduled to reopen in July after landscaping is completed. Mast Park, along with every city park, is closed during the current statewide and county restrictions still in place to reduce the COVID-19 infection rate.

The new fees for the course are $5 for day use and $25 for a monthly pass. The amended fee schedule includes fees for certain fire prevention services including inspections, re-inspections and plan reviews. The fees ranged from $72 to $382, depending on size and scope of the prevention systems and lines.

Minto said he wanted city staffers to “be careful about applying fees during this time” on businesses that have been closed for weeks. He proposed amending the language in the rules. But City Attorney Shawn Haggerty advised giving staff direction to be sensitive about when the fees should be applied should be sufficient. The amended fee regulations passed unanimously.

In two key actions that were voted on during the consent agenda, meaning these were passed without any discussion, the Council approved a grant application to the U.S. Department of Transportation for $25 million to pay for half of the first phase of planned improvements to State Route 52.

The Council also approved a final map or the authorization to build a 128-unit condominium project in the Town Center Specific Plan area north of Town Center Parkway and west of Riverview Parkway. The developer, William Lyon Homes Inc., promised to spend about $1.6 million for street and infrastructure improvements as part of the agreement.

In non-agenda public comment held at the beginning and end of the meeting, 17 people sent emails and letters stating their opposition to a proposed project by the owner of the Carlton Oaks Golf Course. Most of the letters expressed opposition to the addition of any new houses on the golf course given the over-saturation of the city’s connecting roads, particularly Carlton Oaks Boulevard.