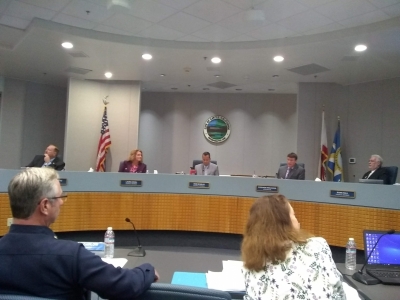 September 19, 2019 (Santee) -- Santee and Carlsbad would seem to be strange bedfellows, given their geographical locations and the latter being twice the size in population. But the cities are moving closer to joining forces to form a new entity to purchase more of their power from renewable sources starting in 2021.

At its Sept. 18 meeting, the Santee City Council unanimously voted to continue negotiating with Carlsbad in forming a joint powers agreement for a community choice aggregation structure that also includes Del Mar, and possibly the County of San Diego and Solana Beach. The latter city is currently the sole CCA in the County, but is looking to join with Carlsbad.

While Santee councilmembers gave clear support for forming a CCA, some are still wary about abandoning their current power provider, San Diego Gas & Electric, and incurring all the risk involved in such a move.

Councilwoman Laura Koval noted that if residents really want to obtain more of their electricity from renewable sources they can do that today through an SDG&E program called EcoChoice. The program allows customers to get between 50-100 percent of their power from renewable sources such as solar and wind. Koval had other concerns about the governance structure of the JPA, and all the costs involved with the new entity.

“I still think we need a little more time to look at this,” she said.

City Attorney Shawn Haggerty assured some of the doubting councilmembers they weren’t making a final decision on the issue yet, only giving direction to staff to come back at its next meeting with more details about the JPA structure and how it would operate.

Several veteran councilmembers appeared resigned to forming a CCA, if only because practically the entire state was moving towards this mode, and being left out presents a much greater risk.

“This is happening whether we like it or not,” said Councilman Ronn Hall. “The reality is we have to do this.”

Mayor John Minto sounded a similar tone. “I’d rather just do nothing, but as an elected official, we have a higher calling to look at the future and do it today,” he said.

Councilman Stephen Houlahan had no doubts about his main motivation behind his avid support for the CCA concept---reducing the city’s carbon footprint, and combating climate change. But he also noted a consultant’s report that stated an average net profit by the JPA of $28.9 million, although that would have to be shared with the other members.

As for savings on electric bills, while some poo pooed the estimated two percent savings from the CCA arrangement, Houlahan said it’s better than what he’s experienced over the last decade: constant rate increases.

Under the CCA, only the power purchasing activity of a utility is transferred to the new entity. All the remaining business lines, including the transmission and distribution of power, infrastructure maintenance, and the billing remains with SDG&E. Representatives of the utility, a unit of San Diego-based Sempra Energy, have said the unit is planning to exit the power purchasing activity over the next five to seven years.

If Santee goes forward with the proposed JPA deal with Carlsbad, all SDG&E customers in the city would be automatically be enrolled in the CCA. If they decided not to join, they could opt out and remain with SDG&E. Customers would also be allowed to opt out later on if they determined the new arrangement wasn’t working for them.

Among the existing 19 CCAs in California, the opt out rate has been very low, well below 10 percent, according to consultant reports.

In throwing their fate with the North County coastal cities, Santee’s Council also clearly rejected another JPA that was approved recently by the city of San Diego--despite the fact that San Diego promised to put up all up front capital costs for each city that joined and to limit a weighted vote formula that gives the San Diego, a city with 1.4 million people, a huge advantage.

Earlier this month, the cities of Chula Vista and La Mesa voted to join the city of San Diego’s JPA. Encinitas already joined the group.

However, most councilmembers said they were skeptical about the promise, saying when push came to shove, San Diego would do what’s best for their city and leave smaller cities 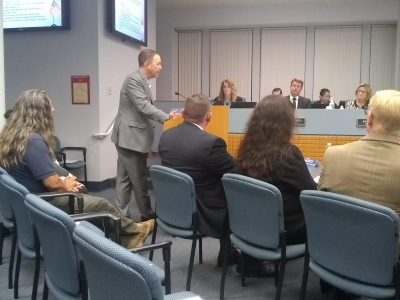 “I’m not interested in (joining with) San Diego,” Minto said, being brief because of a bout of laryngitis. “When you have a smaller group of people at the table, we’ll have a stronger voice.”

Carlsbad’s City Manager Scott Chadwick (photo, left) told the Council the new JPA would adhere to the “one city, one vote” method of governance, and would not use any weighted vote formula that used a city’s population for decision making.

Several councilmembers noted the ability of a CCA to reap expected profits and invest those into energy saving programs such as increased solar capacity, and electrical charging stations, as well as job creation.

Councilman Rob McNelis said while he was excited about the prospects of using profits within Santee, he was also worried about the way those profits would be divided, and the lack of control on their distribution.

By going it alone, Santee would have far more control but incur much greater risks, he reasoned.

Ultimately, the agencies with the biggest populations will likely call the shots, McNelis said. “The more people you have, you’ll likely have more control.”

Several councilmembers also said they preferred the Carlsbad JPA because the city was giving prospective members more time to make a decision, 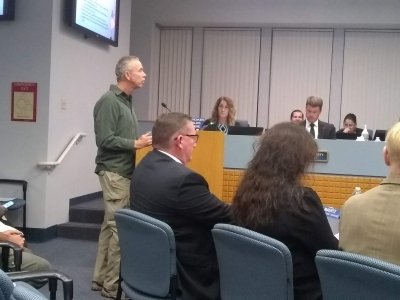 allowing them to join later if they so desired.

But Van Collinsworth (photo, right) executive director of Preserve Wild Santee, an environmental advocacy group, said time is of the essence, and encouraged the Council to chose the San Diego JPA, mainly because it was “ready to go and involve no cost (to Santee).”

“This is a climate emergency. We just can’t afford to wait any longer. We are losing the race right now in terms of the climate,” he said. “There’s so many (weather) emergencies right now you can’t keep track of them...Santee can’t do it all, but we can do our very best.”