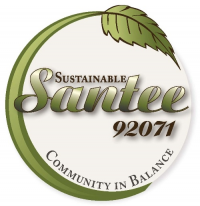 April 25, 2013 (Santee)—Three items before the Santee City Council this week reflect a growing green agenda. These included adoption of a program to help residents finance solar energy and energy efficiency improvements, declaration of May as bike to work month, and announcing April 27 as Arbor Day, when trees will be planted as part of SanTree Fest.

Some examples of what can be financed through this program for residential properties include electrical fixtures, air conditioner systems, solar panels, and small wind turbines.  Such improvements could not only save energy, but also boost property values, potentially increasing property tax revenues for the city over the long term.

Van Collinsworth of Preserve Santee spoke in favor. He told the Council that they “are doing great things with trees and the bike to work program.”  Now, he noted, citizens of Santee are sitting on a “solar field” that is waiting to be exploited.  The Sierra Club also supports the measure, he told ECM, adding that he is “very happy” to see this happening in Santee.

Encouraging residents to cut energy use and produce clean energy also reduces demand for fossil fuels, a need driven home by the recent battle over the proposed Quail Brush gas-fired power plant proposed adjacent to Santee schools and homes near Mission Trails Regional Park on city of San Diego property.  Opposition to the proposed power plant united even such political opposites as San Diego Mayor Bob Filner and Santee Mayor Randy Voepel. Voepel has long been a disbeliever in global climate change, but recognizes the enviornmental and fiscal arguments for encouraging property owners to shift to cleaner energy sources and invest in conservation. 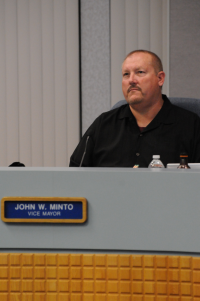 The city also received a  Tree City USA award from the Arbor Day Foundation. Tree City USA means thatSantee has met several standards including a viable tree management program.  Together with the award came the declaration of Arbor Day on April 27, 2013, during the City’s SanTree Fest. City Manager Keith Till accepted the award on the part of the city.

In addition, the city announced a proclamation declaring May bike to work month. May 17 is Bike to work day in Santee. According to Vice President of the City Council John W. Minto, biking “saves money, you lose weight. It is a win-win situation.” It is “also proven emission free.”  Bicycling to work reduces demands on roads by 20% if it’s even done only once a week. Santee has a bicycle central plan and it intends to add bike lanes within the city.

The City of Santee also passed an ordinance banning alcohol in Town Center Community Park except on weekends, holidays, or with a permit at a special event.  The ordinance also defined aggressive soliciting to crack down on panhandling by the homeless.

Jean Emmonds came to oppose this. In her mind, “putting another law in the books will limit law abiding citizens.”

She reminded Council that the weekend is not necessarily Saturday and Sunday any more, and that for some people the weekend might be Wednesday and Thursday. She also doubted the Sheriff’s Department would enforce the ordinance.

There was no discussion, or report from staff; all Council members present voted for it.