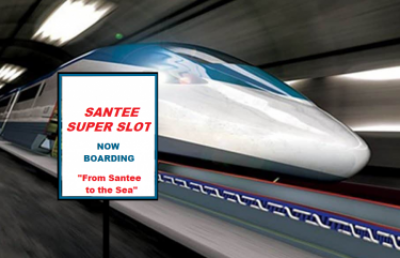 “Our plan is to build the Santee Super Slot, a high-speed underground rail corridor to transport commuters from Santee to San Diego,” he said in a press conference at City Hall. “This visionary transportation innovation will be designed by Elon Musk, similar to the Hyperloop his company is planning between New York and Washington D.C.

The proposal calls for the subterranean railway to be funded in part with transportation grants from the state in line with Governor Jerry Brown’s support of high-speed railway lines.  “This will be the first underground high-speed rail line in the state, traveling through the longest tunnel in the nation.”

Operating funds will be secured via a new city lottery known as the “Santee Super Slotto.” Ex-Santee Mayor Randy Voepel, now in the state Assembly, will carry legislation authorizing a pilot project allowing Santee to be the first city in California to hold its own lottery.  “It’s a gamble sure to pay off,” said Voepel, wearing a tie emblazoned with a rendering of the Santee Super Slot train.

Since the rapid rail line will run below existing roads and State Route 52 and will also dramatically reduce greenhouse gas emissions from vehicles, it has also won support from Preserve Wild Santee leader Van Collinsworth.

“This is a win-win for Santee residents and the environment,” says Collinsworth, who adds that he believes the plan doesn’t go far enough.  ”Let’s take it a step further,” he suggests, “and put Fanita Ranch underground, too,” referring to a controversial large-scale housing project in the works.

Building California’s first 100% subterranean community would offer many benefits, he observes, from keeping homes cool and reducing energy bills, providing natural lighting through strategically placed opaque skylights, also enhancing security far beyond that found in a gated community –all while allowing pristine parks and nature preserves to flourish in the sunshine above ground.