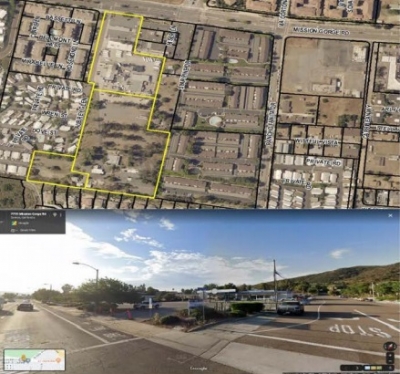 By Mike Allen
Photos Credit: City of Santee
March 15, 2020 (Santee) -- Santee identified 37 different properties that could accommodate 1,949 new houses as part of a state mandated program to spur the building of affordable housing.
At its March 11 meeting, the Santee City Council reviewed the sites identified by city planners as most likely to handle the new units. The majority of the sites are zoned as single family residential, but by increasing zoning densities, a much higher number of living units could be built, which ultimately is the goal, city officials said.
Yet the prospect of change, even if it’s financially beneficial, caused some owners to voice their anxieties.
A woman who identified herself as the daughter of the owner of a single-family house on Conejo Road said she wasn’t sure what the city was doing and asked for an explanation.
Councilman Rob McNelis said the city wasn’t planning to do anything in the near term, but said if the zoning was changed on their property, her parents could either build more units on the site, or sell it at a much higher price to someone who would build the units. But they weren’t obligated to do anything at all, he said. 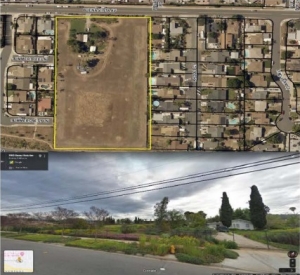 Later, McNelis objected to comments from several speakers who questioned whether the city was displacing low income tenants, or making it easier for the city to “take” property through the eminent domain process.
“We’re not in the business of displacing anybody,” McNelis said. “There’s no eminent domain going on here…We’re not looking to take away somebody’s property, low income or otherwise.”
Santee, like many cities in California, are facing increased pressure from the state to build more affordable housing as one of the key strategies to help reduce homelessness and provide needed housing for working families.
As part of the strategy to induce new development, the state requires cities to adopt regional targets that are included in a city’s housing element. Santee is working on its sixth housing element, which it must adopt by April 2021.
According to a staff report on the issue, the San Diego region must plan for an additional 171,685 new housing units over an eight-year period starting in 2021. Santee’s share of that total as assigned by the San Diego Association of Governments, the regional planning agency, is 1,219, or 0.71 percent of the total.
Santee’s target is further broken down to four income levels: 406 for very low income; 200 low income; 188 moderate income; and 425 above moderate income.
Well aware of this number and of the apparent need to increase its housing stock, even Councilman Stephen Houlahan, elected as a slow growth candidate, said he was open to considering new housing on several of the sites. 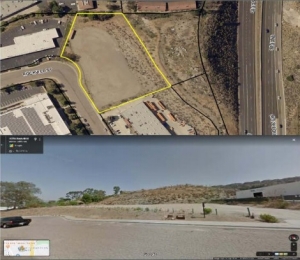 He noted that the 10 parcels on Summit Avenue in the northeastern part of the city appear ripe for higher density to accommodate more units, along with new roads to replace the current dirt variety. He also pointed to the site next to the Wal-Mart and the Polo Barn as possible places for new development.
Councilwoman Laura Koval noted the target housing goal was three times the size of the Weston development, a 400 unit project next to Santee Lakes that was approved by the city of San Diego and then annexed by Santee four years ago.
She said some residents of her Third District were aware of the vacant lot formerly occupied by the Pure Flow Water Co., and hoped it could be used for either a brewery or a restaurant.
The 10.4 acre site at 7737 Mission Gorge Road (photo, very top) is now zoned commercial, but it could be changed to R-22 meaning if 90 percent of the parcel was developed, it could yield 205 total housing units.
A representative of the owners, who were at the meeting, stated they had filed plans to build 80 condos on the site, and don’t want the parcel included for a possible zoning change.
A city planner explained the owners weren’t obligated to build any affordable housing if the zoning change was made. At that point, the representative said the owners now desired the zoning change.
Mayor John Minto said it was interesting when owners come in expecting to have their properties up zoned, but then say, “Don’t take my property.” While he acknowledged owners have property rights, there is also a real need to produce smart growth projects that limit the environmental impacts.
In other actions, the council approved spending $492,013 for street repairs and paving an area just west of Big Rock Park and south of Mission Gorge Road. The funds will come from a $1.5 million surplus the city identified last month. The council voted to use $25,000 of that surplus for activities for the city’s 40th anniversary celebration. It will split the remaining money among three other uses, the paving project, seed funds for attracting more grants for improving State Route 52 and enhancing the city’s General Fund reserve balance.
The council also passed and held the first reading of an ordinance that penalizes an unlawful use of the city’s new logo. Doing so would result in a misdemeanor, and a fine of not more than $500, according to the new law, which takes effect 30 days after the second reading, planned for March 25.