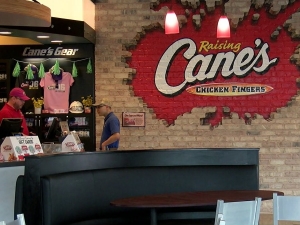 May 1, 2018 (Santee) -- Santee’s restaurant offerings are on the upswing with several having opened in recent weeks, and others planned to open in the near future.

Opening today, May 1, is Raising Cane’s at the corner of Cuyamaca Street and Mission Gorge Road. The Louisiana-based fast food chain is known for its chicken fingers, which are marinated and then deep-fried. The Santee site will be the first in the county. Founded in 1996, Cane’s now has more than 375 restaurants in 24 states including some 10 in Southern California. The business hired 120 people.

Sultan’s Bar & Grill opened earlier last month at 10769 Woodside Ave. in the shopping center just east of Magnolia Avenue and that also houses Filippi’s. The locally-owned eatery specializes in Mediterranean cuisine such as chicken and beef shawarma, kabobs, falafel, and salads. It also does catering.

Growler’s Sub Shack at 214 Town Center Parkway across the street from Costco is actually a rebranding change from a similar business formerly called Firehouse Subs. The owner wanted to do his own specialty submarine menu, and was able to get out of his contract with the chain, according to Pamela White, Santee economic development manager.

Everbowl, a health food chain based in Carlsbad, plans to open an outlet soon at the former Subway at the Trolley Square food court next to the trolley station. The concept lets customers pick their bowls of what the chain calls “superfoods” such as acai, acerola, graviola or pitaya, then adding a choice of different liquids such as coconut milk, almond milk, or apple juice, and then adding a variety of toppings that include fresh and dried fruits, hemp seeds, honey, and agave. The store also will offer fresh smoothies and salads.

52 East Neighborhood Eatery is taking over the site at the Von’s Shopping Center formerly occupied by Boll Weevil. The owners’ Facebook page says the business is owned by Santee natives who are “passionate about good food and good beer.” The same page said the grand opening for the brew pub is June 1.

The Chicken Shop, another independently-owned restaurant, is planned for the shopping center anchored by GTM Store at 8929 Carlton Hills Boulevard. The restaurant’s website, which is under construction, features a menu that includes fried chicken, fried catfish, and fried shrimp as well as hush puppies, okra, and potato salad. It gave no firm date when the eatery would open.

While these eateries hope to gain a foothold in Santee, the nature of the retail industry is turn over, and this city has seen its share of closures. The Papa John’s outlet on Cuyamaca Street in the shopping center anchored by Food 4 Less closed last year and has been replaced by the Wrap Shack, which celebrates its one-year anniversary May 1. Other retail outlets that have closed in recent months are Hometown Buffet, Radio Shack, Family Christian Bookstore, Rue 21, Justice, and one of two Walgreens, according to White.

“Space vacancy (in retail) has not increased and we’re not looking at major storefronts being empty, but there is smaller space available in most centers, in the 3,000 to 4,000 square foot range,” she said.