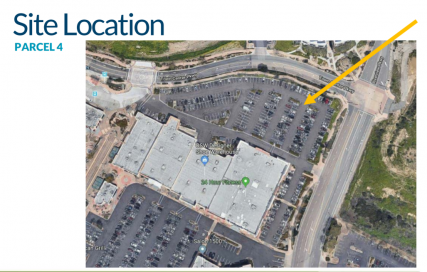 February 12, 2022 (Santee) -- Santee’s grand plan to turn part of Trolley Square into an arts and entertainment district took a big step forward on February 9 when the City Council approved the sale of a parcel for a four-story, 89-room hotel.

The site was once planned as a new library, but the Council nixed that two years ago and decided it was better suited for a hotel aimed at regional tourists, including the legions of out-of-town baseball teams competing at nearby Sportsplex USA

The Santee Council wasted no time voting 5-0 this week on the development agreement with Excel Acquisitions LLC for the planned hotel. It will include a swimming deck and 64 parking spaces, with the city receiving $1.4 million for the parcel. Excel promises to bring in either Hilton or Marriott to run the hotel and to get the deal done before Dec. 1 of this year, although that deadline can be extended.

“Some of these tournaments can last a weekend or several days longer,” Minto said. “Many of these people are staying outside the city because they can’t find rooms at our current hotels.”

The city has been talking with Excel for years, but was thwarted in getting the project going due to litigation with Santee Trolley Square 991 LP, the shopping center owner that claimed ownership of the parcel.

The city and the center owner settled their legal dispute earlier this month, leading to the official agreement with Excel at the Feb. 9 meeting. 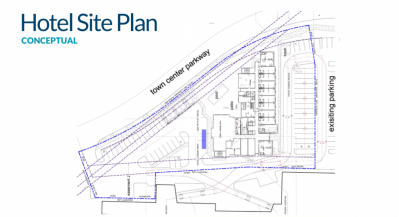 A hotel would obviously generate much higher tax revenue than a library, but many Santee citizens who’ve heard the Council talk about building a new library facility for decades feel as though the project is a very low priority.

“I certainly understand where our city leaders are looking to improve our tax base to pay for our city’s needs, but we hope we can continue working with them to get a new library built for this community,” said Cheryl Cosart, president of the Friends of the Santee Library.

The current library is in an aging strip mall off Carlton Hills Boulevard that has insufficient parking and ongoing plumbing problems. The tiny space, one of the smallest in San Diego County, means readers usually must order books through the county’s online website and pick them up later.

When the City Council abandoned plans for a library site at Trolley Square two years ago, it never designated an alternate site. A tentative plan to combine a library with a community center was also abandoned about a year ago.

Minto said the city has been talking to a number of landowners about finding the right site for a new library, but hasn’t been successful.

“We’d like it to be someplace in the arts and entertainment area. We’ve promised (the library) for a long time, but haven’t been able do it. But it hasn’t been for a lack of trying,” the Mayor said.

Two other key developments for the arts district that the city hoped would be open by now are either dead or appear unlikely to happen. A theater restaurant called Studio Movie Grill went bankrupt last year, killing that project.

Karl Strauss Brewery, approved by the city in 2015 as the new headquarters for the successful San Diego brewery along with a tasting room and restaurant behind Trolley Square, has not been able to make any headway towards construction. The project did encounter some opposition early on from Preserve Wild Santee, a local environmental group, but those differences were settled in 2019.

Minto said if nothing happens by the end of this year, Karl Strauss will lose its entitlement.

But not all of Santee’s plans have taken a hit. Another hotel, Woodspring Suites, a division of Choice Hotels which was approved by the council two years ago, is still in the works. The 122-room extended stay hotel is going in at the intersection of State Routes 52 and 125.