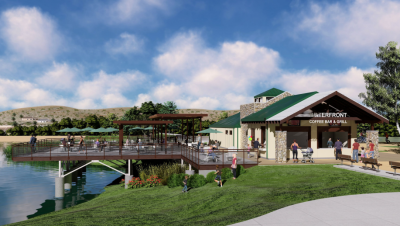 By Mike Allen
Photo: Santee Lakes general store/grill concept rendering
December 22, 2020 (Santee) -- A three-building construction project at Santee Lakes is nearing completion, but because of the pandemic, exactly when it will be finished is still difficult to know.
Laura Koval, the director of parks and recreation at the Santee Lakes Preserve, said while the finish line is in sight, it could be anytime between February to April.
“What I’m saying is spring of next year,” Koval said in a recent interview with East County Magazine. “When you add COVID to the mix, you just don’t know what’s going to happen.”

The project that has been going for about a year and half entails the tear down and rebuild of the park’s administration building, and renovations to two other buildings, the general store and event center.

But the original completion date of January won’t be met because of two problems that hit it this year: the infection of a worker who contracted Covid-19, and a decision to change the material on the decking of the general store building.
The infection of a subcontractor worker occurred Nov. 30, and caused the project to shut down for two weeks while everyone involved went into quarantine, Koval said.
The decking issue arose after about a third of the outdoor flooring was installed, and Koval and other park managers realized the material wasn’t going to work out. The composite wood material called Trex wasn’t satisfactory and required a change order, Koval said. 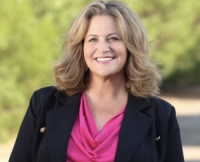 Photo, right: Santee Councilmember Laura Koval, director of parks and recreation at the Santee Lakes Preserve
While the setbacks caused some delay, the project, which is being done by Team C of El Cajon, is still coming in on budget for about $9.1 million, including the design costs, Koval said.
All of those funds come from Santee Lakes budget that is derived entirely from park fees charged to visitors, primarily those coming in recreational vehicles who often stay for extended periods.
Although Santee Lakes is owned and operated by the Padre Dam Municipal Water District, the park is self-sustaining and receives no financial support from the water district’s budget, which comes from fees assessed for water distribution and sewage collection.
After paying out nearly 80 percent of the funds for the construction project, the Santee Lakes’ fund balance stood at $5.7 million as of the end of October, according to a recent park report made to the district’s board of directors.
“That’s all for our capital improvements, and it’s almost tripled in the past five years,” Koval said.
Of course, 2020 was a lousy year for the park financially, which was entirely shut down for several months and forced to halt all of its special events due to the risk of possible infection from the Covid-19 virus.
For the fiscal year ended June 30, the park sustained a net loss of $250,000, but that wasn’t bad considering the operation sustained a decrease in revenue of about $635,000, Koval said.
Those losses resulted from an inability to host any events such as parties and weddings, the closure of the general store, and the flood of cancellations of reserved RV and campground spaces.
To offset the revenue declines, the park froze staffing levels, made no summer hires, and trimmed other expenses, Koval said.
Santee Lakes has about 20 employees, including 11 full-timers. The total employment for the entire Padre Dam district is 138.5 persons. 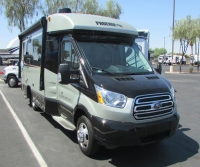 Photo, left, credit: La Mesa RV
One of the things helping to balance the revenue losses was the surge in popularity of RV camping. “RV camping is one of the safest things people can do during this pandemic, and we benefited from that trend,” she said.
Once the construction project is done, local residents will have yet another nice place where they can grab a latte or a mug of a local craft brewery, and sit back and enjoy the beauty of one of the nicest attractions in Santee, Koval said.
The grill will also have an expanded menu, and be open more regularly than the one it replaces, which had limited hours on weekends only. Koval said the park is in negotiations with a food vendor, but hasn’t signed a contract yet.