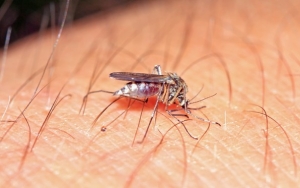 July 27, 2014 (Santee)-A 43-year-old Santee man has the first confirmed local case of West Nile virus  this year, the County Health and Human Services Agency reports.  There has not been a human case of the disease in San Diego County since 2012.

The disease, which is transmitted by mosquito bites, was detected during routine screening of blood  that the man donated.  He did not recall any mosquito bites lately, but may have been bitten while camping outside the state recently.

The County’s Department of Environmental Health Vector Control Program is inspecting for potential mosquito breeding locations near the man’s home and setting up mosquito monitoring traps in the surrounding areas of Santee.

Wilma Wooten, the County’s Public Health Officer, says a dead crow tested positive for West Nile Virus in the city of San Diego last week, so the virus is definitely in our region.  She adds,  “It’s important for the public to know West Nile virus is a dangerous and potentially deadly disease.”

Of those who become infected with West Nile virus, 80 percent will have no symptoms. About 1 in 5 people who are infected will develop only a mild illness that includes a headache, fever, nausea, fatigue, skin rash or swollen glands. Less than 1 percent of those infected will have serious neurologic complications that can be life threatening. The risk of complications increases for those over age 50, and for people with weakened immune systems.