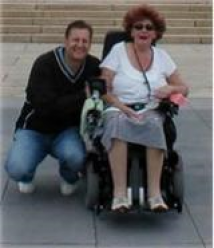 February 8, 2016 (Santee) – Carol Wahl died of amyotrophic lateral sclerosis or ALS, better known as Lou Gehrig’s disease on March 1st, 2010. To honor her memory and raise money to help other ALS patients have better lives, her son, Mark Solz, will embark from Petco Park in San Diego on March 1st for a 3,200 mile walk across America.

Solz grew up in Santee, where he played baseball at Santana High School and later, San Diego State University. He went on to play minor league baseball with the Cubs before moving on to careers in construction and more recently, acting.  Now he’s going to bat for ALS patients.

He expects his cross-country walk will take seven to eight months. He aims to end his journey at Yankee Stadium in New York, former home to baseball great Lou Gehrig, just in time for the 75th anniversary of Gehrig’s death. Gehrig lost his life to ALS and the neurodegenerative illness became known as Lou Gehrig’s disease in his honor.

Solz writes on his website,“I had heard about Lou Gehrig’s disease but prior to my Mother being diagnosed with it, I really had no idea what it was.”.

Carol Wahl was an active senior who even competed in the Ms. Senior California pageant the year before she fell ill while on vacation. The first symptom was slurred speech.  After months of tested, she was diagnosed with ALS and within two years, she was gone.

Solz says he talked about his idea for the cross-country walk with his mother, who supported his mission.

“I told Mom of my desire and she said through her computer translator for me to bring along her ashes and drop some of them in each state I cross,” he recalls, adding that his mother loved to travel. “So, that’s what I’m getting ready to do,” he resolves.

He’ll bring a push cart, tent and sleeping bag, also stopping at motels along the way to freshen up.

Solz recalls what a positive difference it made for his mother when she received a machine that enabled her to communicate after she lost her speech and the ability to raise her arms.

He chose walking as his mode of transportation for his cross-country trek in part because “when you see someone you love start to lose that ability, it gives you a new appreciation of walking,” he wrote on his blog.  In addition, he concludes, “It’s not about the destination. It’s about the journey.”

On March 1st, he’ll be walking from San Diego through East County before crossing the county line at Ocotillo—and the public is invited to join him as he walked through our region.

You can learn more about this remarkable journey, or donate to support the nonprofit Gleason Initiative Foundation, at Solz’ website: www.ALSWalkAcrossAmerica.com.