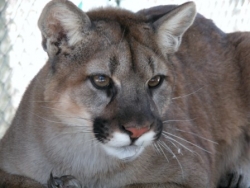 December 9, 2011 (Santee) – West Hills High School in Santee was briefly locked down this morning after a caller reporting spotting a mountain lion nearby.  Fish & Wildlife officers, along with Sheriff deputies, searched the area with help from a Sheriff’s helicopter but could not locate the animal.

Several other lion sightings were reported  earlier this week locally, though most remain unconfirmed.

On Thursday, a possible mountain lion sighting was reported near Oak Valley Middle School in 4S Ranch and another a few hours later in Rancho Penasquitos off Carmel Mountain and Black Mountain Roads.  On Monday yet another possible sighting of a mountain lion was reported in a canyon off 4S Ranch Parkway. In addition, the Alpine Community Network has reported sightings of mountain lion cubs in Alpine.

Mountain lions, which are native to our region, are protected species.  Residents in areas where mountain lions are known to be present are advised to keep small pets indoors and avoid allowing small children to play outdoors unattended.