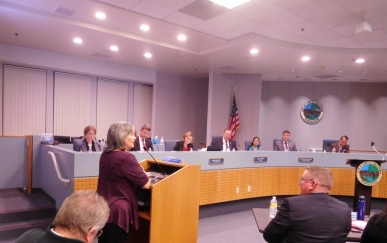 January 26, 2018 (Santee) -- Despite having one of the most homogeneous populations in the county and lacking any concentration of minority groups, Santee elected officials say the city’s hands are tied, and Santee is forced to comply with a state law urging cities to adopt district elections.

At its Jan. 24 meeting, the City Council took another step to changing the way voters select council members to one that divides the 16-square mile city into four districts. Voters in each district would vote for a single representative. The mayor’s position would remain as “at large,” or selected by all city voters.

Most Council members said they aren’t happy about making the change but cannot risk challenging a law where no city in the state has succeeded in winning.

“This is not something that any one of us wanted to do. This is what the state of California is asking us to do,” said Councilman Rob McNelis. “Let’s make the best of this.”

City Attorney Shawn Hagerty told the Council that not complying with the state’s Voting Rights Act and adopting a district elections system could put the city in jeopardy of being sued. So far, the law firm that has sued cities that challenge district elections has won every time.

“The law is designed to encourage the process to go forward,” Hagerty said.

Among the California cities that have challenged and lost are Palmdale, Modesto, Highland, Anaheim and Whittier, all of which were forced to shell out settlements of more than $1 million. In Palmdale’s case, the settlement was $4.7 million, but could be higher as the case is on appeal.

While the law’s intent is to provide representation to minority groups, the absence of any concentration of ethnic or racial minorities in Santee means there isn’t any problem the law would solve, said Councilman Ronn Hall.

Hall was the lone no vote when the council voted to convert to district elections Jan. 10.

Data displayed by NDC taken from the 2010 federal census showed Santee’s population of 53,413 had about 9,000 Latinos, 2,700 Asians and 1,300 blacks, making up 16 percent, 5 percent, and 2 percent, respectively. Native Americans and Pacific Islanders each account for roughly 1 percent of Santee’s population. Whites made up 74 percent of the total.

McEntire also noted a map using colors to delineate the concentration of any ethnic groups found no group having any significant presence in any area. He said the law prohibits drawing district boundaries based on racial characteristics. However, the lines can be drawn based on language, culture, school boundaries among other factors, he said.

The lines can also be made based on natural or man-made barriers. Other criteria used in determining district boundaries are shared demographic elements such as similar levels of income and education, McEntire said.

Only two residents spoke at the first public hearing on the proposed district process. Van Collinsworth said the system could be an opportunity to improve representation on the council for women and younger people. The current council is made up of five white men, all of whom are more than 40 years old.

Councilman Brian Jones took exception to the charge, saying both groups are indeed represented. “Five of us are married, and four of us have children,” he said.

Jones urged all residents to participate in the process that was under way, and provide comments on what was being proposed. Residents can make suggestions and share their thoughts by logging onto the city’s website, http://cityofsanteeca.gov/.

“This doesn’t work without the public being part of the process,” Jones said.

A second public hearing on the elections issue will be held Feb. 14, leading up to the drawing of what could be dozens of possible maps to consider. Once possible maps are drafted, the city will hold two more public hearings to solicit public comment on March 14 and 28. Then on April 25, there will be a final hearing and adoption of the district map, according to a schedule provided by the consultant.

It’s a process that could also change depending on what happens on the legal front, some noted. The city of Poway is challenging the voting law in federal court, and should it prevail, then Santee may forego shifting to district elections, several councilmen said.

The Santee City Council’s sentiment remained grudging compliance with the state law to avoid risking losing in court, which would result in paying $30,000 in court costs, a figure that was capped for cities last year.

“I don’t want to spend $30,000 of taxpayers’ money if we don’t have to,” said Mayor John Minto. “If no one’s won (a legal challenge to the state law) what makes you think we’re going to win?”