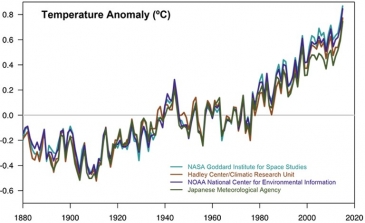 Chart courtesy of NASA: Temperature data from four international science institutions all show rapid warming in past few decades-- and the last decade has been the warmest on record.

April 24, 2017 (Santee) – Santee’s City Council took a step toward establishing a “Sustainable Santee” climate action plan, but only under pressure from the state to do so.

By a 4-1 vote on April 12, with Mayor John Minto opposed, the Council voted to hire LSA Associates to complete the city’s climate action plan and an environmental impact report, as required by California law. Council authorized paying up to $133,000 to the consulting company.

California’s ambitious climate regulations mandate that cities cut greenhouse gas emissions at least 15 percent below 2005 levels by 2020, phasing up to an 40% reduction by 2030 and 80%  by 2050.  Fanita Ranch development funding will pay for $93,000 of the consultant fees, with another $40,000 from the city’s general fund.

At a contentious hearing, newly elected Councilman Stephen Houlahan said it makes sense to move forward on the sustainability plan, to protect the city’ from a potential lawsuit if it failed to comply, apart from the environmental concerns.  Houlahan, who led efforts to defeat the Quail Brush gas-fired power plant near Santee, ran on an environmental protection platform.

But Mayor Minto balked at having to follow a state mandate.

Brian Jones, newly appointed to the Council after leaving the state Assembly due to term limits, also criticized Sacramento politicians. “These types of policies are going to break the backs of cities that don't have the money,” said Jones, a noted climate change denier who has previously held an event featuring a prominent climate change skeptic as speaker.

The San Diego Union-Tribune reports that half of the 18 cities in San Diego have adopted climate action plans so far, and six others are developing their plans, including La Mesa and Lemon Grove.

California’s climate regulations are the most ambitious in the U.S. and one of the strongest in the world, though the European Union has similar goals of reducing greenhouse gas emissions over the next several decades, KPPC has reported.

Over 97% of the world’s top climate scientists published in peer-reviewed journalists agree that climate change is real and that man’s actions contribute to the rapid rise in global warming since the introduction of fossil fuel emissions by man, NASA reports.

Reliance on cleaner sources of power such as solar and wind, as well as vehicles that run on electricity or other non-fossil fuels, also reduces U.S. dependence on foreign oil and can create jobs in newer clean energy fields.  A key challenge is grid stability with wind and solar, but strides in battery storage are helping to alleviate that issue.

The primary opposition has come from the oil industry and businesses concerned about the costs of shifting to a cleaner, greener economy, smaller cities with limited budgets, and politicians who disregard science.

another waste of taxpayer money by the abusive fools in sacramento who are in the pockets of special interests who are against freedom and sane policy. grab power and money and the heck with the citizens. all of the hand wringing and lies will solve nothing, neither will delusions. I pity the fools who think natural gas produces smoke and is bad for the environment, the fools who want alternatives but not in their yards, and the fools who believe those who fly all overt the world to cocktail parties telling the rest of us to change. I pity them because they are sheep being led to a slaughter by con men and evil abusers and thieves