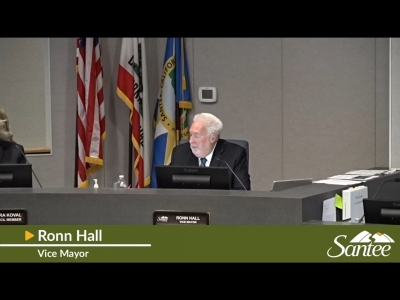 March 11, 2022 (Santee) -- While it’s legal to use and even grow marijuana for personal use statewide, the sale of the still-federally prohibited drug is not permitted in Santee.

That could change given the path that the City Council has been on since last year, when it began exploring the potential of allowing some type of marijuana-linked business within its 16.5 square miles.

The Council is now considering putting a city-drafted ordinance on the ballot to let voters determine whether cannabis businesses should be legalized – and if so, assure that legalization is within a tightly regulated framework.

The Council’s consensus is that such businesses are generating lots of taxes for other cities, and Santee could certainly use more revenue. The Council is also motivated to enact its own law governing where marijuana businesses could be located, and place other limitations on  operations instead of letting such matters be decided by a possible citizens initiative, presumably by eager cannabis entrepreneurs.

At the fourth public workshop on the issue March 9, Santee’s City Council considered a draft ordinance written by its staff that gives the five-member board some options regarding the types of cannabis businesses permitted, the buffer zones around various places that were off-limits, and enhancing certain restrictions.

Some on the Council said a proposed 600-foot buffer around schools, parks and youth centers wasn’t big enough, and asked what it would mean if the buffer zone was 900 or 1,000 feet wide. A staffer plugged in those dimensions into a color map, and showed at the maximum limit, very few areas would be available for the enterprises.

Vice Mayor Ronn Hall, who was initially opposed to changing anything in the city’s current code covering cannabis, said his personal buffer would be four miles. Hall has shifted from absolute opposition to changing existing law to writing a tough law giving the city more controls. He took a longer time asking questions and proposing more restrictions in the law.

Hall recounted one incident involving dropping off his grandson to a day care place in El Cajon, and discovering an illegal pot shop right across the street. Should any of the businesses generate a shooting, it could result “in having a dead kid on your hands,” referencing the shooting of a security guard last year at an illegal Spring Valley dispensary.

He noted there was no restriction on the number of micro businesses, or those engaged in cultivating, manufacture, testing or distributing cannabis in the draft law, and wanted it capped. The Council asked staff to set a cap of four retail outlets.

But most of Hall’s colleagues said prohibiting those micro businesses from expanding their functions to retailing the product was acceptable and shouldn’t be limited.

Mayor John Minto said the Council’s main concern was limiting the number of retail outlets and not on the number of micro businesses because those entities won’t be able to add a retailing operation.

“If someone comes in and (proposes) 10 testing labs, I don’t see a problem with that. A micro business will not allow a retailer as part of the four,” he said.

Given the few areas where a cannabis business might be located using the 1,000-foot buffer, the Council reduced the buffer to 900 feet. That showed the possible sites limited to the city’s industrial zones south of Mission Gorge Road except for a small node on the western side, parts of Cuyamaca Street, and parts of Woodside Avenue. Everywhere else would be off limits.

Ironically, a majority of the potential sites for the cannabis businesses were in District 2, represented by Hall.

The revised draft ordinance will come back to the Council, but must be adopted by July in order to get on the November ballot. During the public hearing portion of the workshop, four speakers said they opposed any loosening of the city’s current prohibition of cannabis sales, although some noted they understood what the Council was trying to do.

In earlier workshops nearly all speakers and those emailing comments opposed making it easier to obtain marijuana in Santee. Most said the drug was a well-documented first step to a life of drug addiction. Others stated that such businesses result in an increase in criminal activity, and that the taxes the sales generated do not outweigh all the additional policing costs required.

Thank you to Mike A.