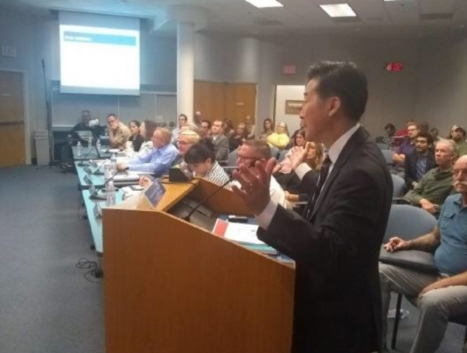 July 26, 2019 (Santee) -- Santee’s City Council took a more in-depth look this week at establishing a new entity that promises to provide energy at reduced rates while obtaining more of the power from renewable sources.

Called Community Choice Aggregation, the alternative method has been adopted by 19 areas in California, including Los Angeles and Ventura counties. Here in San Diego County, the sole CCA is the city of Solana Beach, but the alternative system is being considered by the cities of San Diego, Oceanside, Chula Vista, Carlsbad, Encinitas, and La Mesa, and the County itself.

At its July 24 meeting, the Santee Council heard from its hired consultant that the 58,000 populationcity could indeed create its own CCA, or join with other cities to create a larger entity that could provide even greater savings for customers.

Howard Choy, a senior associate for Kirkland, Washington.-based EES Consulting Inc., said forming a CCA was financially feasible for Santee, and could yield rates that are two percent below what San Diego Gas & Electric currently charges. That estimate is based on Santee partnering with two other cities, Chula Vista and La Mesa, the other cities that joined Santee to pay for the feasibility study which cost $28,000.

Should Santee set up its own CCA, the rate savings would be about one percent of the current bills, according to the draft EES report.

“We believe the risks (of adopting a CCA) certainly exist, but in today’s operating market, they’re certainly manageable,” Choy concluded at the end of his presentation.

Chief among the many concerns Council members voiced after Choy finished his report was how Santee can afford to pay for all the up-front costs, which are in the millions of dollars, and securing the millions required to purchase multi-year power contracts.

Not to worry, Choy said. Borrowing the funds, estimated at $3 million if Santee goes it alone, or $12 million for a three-city joint powers CCA, from banks or other corporate lenders, is definitely possible especially now as the market is more familiar with CCAs, he said. In the joint powers with Chula Vista and La Mesa, Santee’s share would be about 20 percent, or $2.4 million.  The funds are needed to purchase power and for operations.

There would be a lag-time of a few months, but revenue from customer payments would be coming in to pay down that debt fairly quickly, according to Choy.He added that CCAs can obtain loans for start-up capital at below a four percent annual interest rate.

Additionally, if the city decides to join with the city of San Diego in a joint powers authority it’s proposing, the latter would assume all of Santee’s up-front costs, Choy said. Of course they’d expect to be repaid over some time, he added.

Councilman Rob McNelis said while San Diego’s offer seems nice, Santee’s ability to control its energy future would probably be subjugated to the needs of a city of 1.4 million.

McNelis tried to get Choy to guarantee the minimum 1 percent savings if Santee creates a CCA, but Chow said, “I wouldn’t say we going to guarantee it, but I’d say our model is forecasting it.”

To ensure it has sufficient revenue to pay for those services, and be compensated for all investments it’s made in the past, the utility will charge an exit fee to be assessed monthly.

CCAs operate through an opt-out arrangement. That is, once the CCA is established, all customers are automatically enrolled, although they can opt out if they desire.

Just how this “exit fee” is determined is still quite uncertain, according to the EES study, which said much depends on the cost of power contracts, and how many customers decide to stay with SDG&E, or return to SDG&E.

Should energy market prices increase, regulations become more onerous, or there’s a big spike in customers opting-out, it could offset those expected rate savings, and possibly even make the rates higher than what the big utilities would charge, the EES study said.

The study touches on the anticipated exit of SDG&E from the energy generation and supply business. With about half its customers (from the city of San Diego) poised to leave, the utility is seeking approval from the State Legislature through a bill, AB56, to “create a way for the utility to sell long term power contracts to ‘a state-level electrical procurement entity.’

Despite all these unknowns and risks, Councilman Stephen Houlahan gave a full-throated endorsement to forming a CCA that would aim to buy at least 75 percent of its power from renewable sources, growing to 100 percent renewable sourced power by 2030.

Houlahan, a slow-growth advocate with a strong environmental bent, said while the cost savings may seem small, these are considerable when extrapolated over years, although he did have concerns over start up financing.

The remainder of the Santee council appeared skeptical and peppered Chow with many questions, most dealing with the possibility of a catastrophic disaster that puts the city and the new CCA in a precarious position.

“We’re talking about a lot of money here,” said Mayor John Minto. “We have to consider putting our money into this (CCA) or fixing our streets.”

“In the case there’s a major disaster, who protects the cities from inverse condemnation or bankruptcy?” Minto asked.

Choy explained that the investor-owned utility as grid operator still maintains the lines and wires and assumes any liability for wildfire damage if it’s proven that their lines and wires were the cause of the fires.

ECM asked Choy after the meeting if the CCA trend could be another misstep by California, along the lines of what the state did in the late 1990 and deregulating the power markets--changes that led to massive spikes in energy bills, and rolling blackouts.

No, Choy asserted. “That was a completely de-regulated market and CCAs are still somewhat regulated by the PUC,” he said. “That was a high-demand/ short supply in those days. Now in California there’s a lot more supply.”

The council agreed to hold another workshop to explore the issues they raised concerning a possible joint powers authority CCA, and get more definitive answers on a range of financial questions.

The City of San Diego and San Diego County are also exploring CCAs, with the potential to include cities within the county such as Santee.

Time is of the essence, the Council was told, because the city of San Diego “wants to get a CCA started now,” said Assistant City Manager Kathy Valverde.

San Diego also wants to know if Santee will join with them, and has to get an answer by Oct. 1, she added.