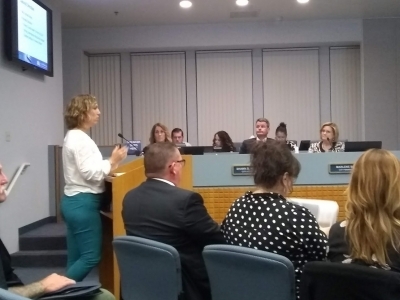 August 30, 2019 (Santee) -- The Santee City Council agreed to adopt a community choice model for purchasing its future electricity but isn’t sure yet what the model will look like.

While no vote was taken at its Aug. 28 meeting, all five Santee councilmembers said they would support a community choice aggregate or CCA model that would give the city more control over the power it uses, and reduce customers’ bills by at least 1 percent.

CCAs have been growing in California as more cities look for ways to accelerate the adoption rate of power purchased from natural sources such as solar and wind instead of carbon-burning plants. A CCA only buys the power for a city. The current energy provider, San Diego Gas and Electric, will continue to maintain and distribute the energy, as well as bill for the service.

If a city adopts a CCA model, all customers would automatically be enrolled, but have the ability to opt out and stay with SDG&E as power purchaser.

While only one CCA now exists in San Diego County (the city of Solana Beach) most of the cities are considering either forming a CCA or joining with other cities to form a joint powers authority (JPA) that would provide greater economies of scale in buying the power and paying for expenses such as staff and marketing.

A feasibility study that was jointly commissioned by Santee, Chula Vista, and La Mesa found that not only can a CCA help in achieving much higher clean energy goals in terms of renewable sources of power, it could also provide cost savings of 2 percent if the three-city, JPA model was formed, and 1 percent if Santee formed its own CCA.

At this week’s meeting, representatives from the cities of San Diego and Carlsbad invited Santee to join their JPA. Cody Hooven, San Diego’s chief sustainability officer, told the council that San Diego would assume all of the up-front costs to get the JPA launched, estimated for Santee in the study to be $3 million.

Hooven said San Diego wanted to get Santee’s decision on joining soon because of a compliance issue coming at the end of this year that involved a great deal of cost benefits to its customers.

Several Santee councilmembers said they didn’t like the JPA structure which gives San Diego far more power and could negate any cost benefits to the smaller cities.

“I have no desire or need to have another SANDAG (San Diego Association of Governments, another regional JPA for transportation planning that is dominated by the city of San Diego on our hands,” said Councilman Ronn Hall. Addressing Hooven, he added, “You guys can say you will be fair, but you won’t.”

Although several councilmembers talked about multiple risks in forming a CCA, they noted SDG&E’s apparent future direction forced it to take action.  Joe Britton, an SDG&E spokesman, told the Council his company was exploring “getting out of energy procurement” within five to seven years but would be committed to being the energy provider of last resort should the CCA fail.

Jason Haber, assistant to Carlsbad’s city manager, said that city was also interested in launching a CCA with other cities by 2021. To address a key problem for Santee and other smaller cities, Haber said the JPA would use a “one city, one vote” model for decision-making. It would not use the “weighted vote” mechanism that gives cities with larger populations more voting power.

Carlsbad was talking with Encinitas, Del Mar and Oceanside about a JPA, but Encinitas, along with Chula Vista and La Mesa recently decided to join the city of San Diego’s JPA. Haber said that San Diego County is also interested in possibly joining with Carlsbad, as well as Solana Beach, which launched its CCA last year.

Five of seven people speaking on the CCA issue supported adopting the new model, saying the benefits outweighed the risks.

“You can’t be worried all the time about turf wars,” said Van Collinsworth, executive director of Preserve Wild Santee. “The train is moving so let’s get on it. CCA works. We’ve seen it statewide.” 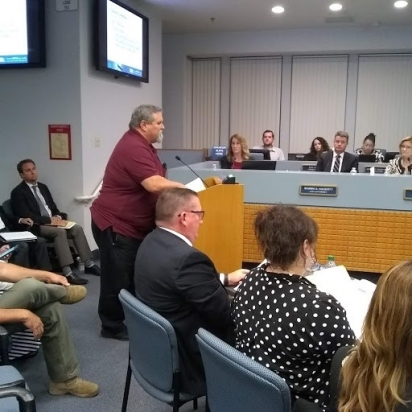 Dan Bickford (right) said the millions of dollars the city would be assuming in liabilities by forming the new entity was too great. The domination of San Diego in the proposed JPA was also something Santee should avoid, he said.

“If it’s a weighted vote, we’ll just get lost in the shuffle,” Bickford said. “We’re just trading one big monopoly (SDG&E) for another big city monopoly.”

Once adamantly opposed to CCAs, Councilman Rob McNelis said he’s come around to supporting the model because it would give Santee greater local control over where to put the profits coming from savings rather than hoping for certain investments from SDG&E. McNelis and others noted Santee has asked for more electric battery recharging stations but it hasn’t happened.

Mayor John Minto, another self-described opponent of CCAs, said he was also leaning to forming the entity and said the Council shouldn’t just look only at the financial implications but consider what the long-term benefits would be.

Councilman Stephen Houlahan, the strongest environmental voice on the Council, said he absolutely supported forming a CCA, but, like all other members, wanted a more thorough financial analysis of the different governance models.

In other actions, Santee held a public hearing on its newly created climate action plan, which it called the Sustainable Santee Plan. Most members had issues with the plan, and asked staff to return with an improved one. Houlahan said the plan “takes a lot of inventories and a lot of assessments, but after that, we’re not doing much.”

The Council continued the issue to its Nov. 13 meeting.