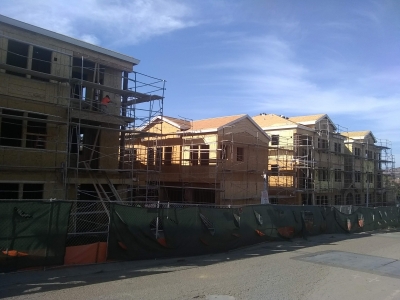 By Mike Allen
January 29, 2021 (Santee) -- It’s called a housing element, a document that every city in California must update every eight years. It outlines how a city plans to expand its housing inventory, especially its low income housing numbers.
Santee’s City Council continued producing its update at its Jan. 27 regular meeting, a process that began more than a year ago so it could be approved by an April deadline. From comments made by councilmembers at the meeting, Santee’s housing obligation is far better today than it was a few years ago, when it was whittled from about 6,000 to the current target of 1,219 units.
Yet half that target must be in low income housing, specifically 406 in the very low income category, and 200 in the low income category, according to the plan that was approved by the Council in a 5-0 vote.
The remainder of the targeted number, called the Regional Housing Needs Allocation or RHNA, is 188 units in the moderate income category, and 425 in the above moderate income category.
The RHNA was determined and assigned to Santee by the San Diego Association of Governments (SANDAG), the regional planning agency consisting of the county’s 18 cities and the county itself. The RHNA for the entire San Diego County is 171,685.
Neither SANDAG nor the state Legislature received any plaudits from Santee’s Council, and some were downright critical.
“There’s really no rhyme or reason for the way they do this in my opinion,” said Mayor John Minto. “There were four appeals that were filed at SANDAG over this by (other smaller) cities.”
Of the four city appeals to lower the RHNA, none were upheld due to the agency’s weighted vote, which gives the largest cities such as San Diego and Chula Vista much greater voting power, and leaves smaller cities such as Santee and Coronado often at the short end, Minto said. 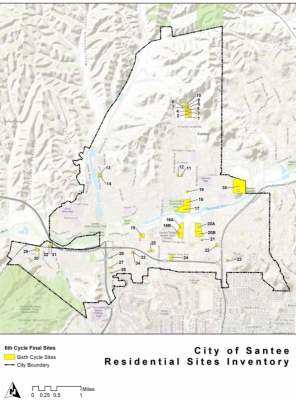 To accommodate the future housing units, Santee planners identified 37 vacant and under-utilized sites throughout the city ranging from a half acre to 10 acres. Of those, 28 sites could be up-zoned, increasing their density capabilities to handle the construction of much greater numbers of units, according to the city’s housing element that was forwarded to the state Department of Housing and Community Development before it’s returned to the city for a final adoption.
Santee will have no problem meeting the moderate and above-moderate units target; it’s the low income target it will have difficulty meeting, the housing element states.
While the potential for building new housing is on sites all over the city, the two key areas for low income and higher density construction are on Summit Avenue and its Town Center. The housing element identified six sites where the property owners have an interest in developing at higher densities than currently permitted under the existing zoning, the housing element states.
All this triggered the question as to how the element would be affected by Measure N, the referendum passed by city voters in November which requires any increase in a property’s density or use under the current General Plan to go to a public vote. City Attorney Shawn Hagerty said that Measure N contained exemptions for state-mandated housing targets, precluding such a vote.
The revised housing element also addresses the Fanita Ranch project with its plan of about 3,000 units. But that project will not count to satisfy any of the RHNA target, the report states. Fanita Ranch was put on hold after the City Council rescinded an earlier approved plan and set a public vote on the development for November 2022 following a successful voter challenge verified by the county Registrar of Voters in December.
Several councilmembers said despite the draft housing element showing relatively reasonable RHNA targets, they had no illusions that the state could change its mind at any moment and cause Santee to have to scramble to meet new requirements.
“In the 10 years I’ve been on the Council, this (RHNA) has always been a moving target, it’s always a moving target, and will continue to be a moving target as Sacramento continues to dictate from the ivory tower about what happens here with unfunded mandates,” said Councilman Rob McNelis. He said he expected even more new laws calling for increased new housing targets to soon come down the pike and force smaller cities like Santee to comply or suffer the consequences.
Along with dealing with state mandates on housing, Santee also approved a comprehensive update to an existing Pedestrian Master Plan that includes improvements to both sidewalks and bicycle lanes.
The Active Santee Plan, which was developed with community comments, proposes to build about 16 miles of new bike ways, 126,000 feet of new sidewalks, and 155 new curb ramps.
Several councilmembers noted the new bike paths included one right down Mission Gorge Road, the city’s main thoroughfare, which they said was far too dangerous.
“I agree with the comments (by both McNelis and Councilman Ronn Hall to keep bicyclists and vehicles separate on Mission Gorge)," said Councilwoman Laura Koval. “The traffic is already too fast and congested and it’s not a safe place for a bicycle.”

Will there be more police and, fire stations and more  medical facilities  to support the increased population?

van collinsworth will be filling a lawsuit to stop this.