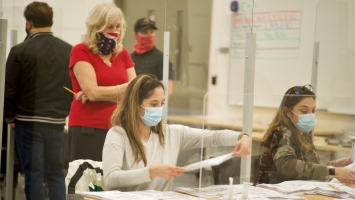 December 15, 2020 (Santee) – Yesterday’s recount in the Santee District 4 City Council race took place at the Registrar of Voters.  Each candidate picked up one additional vote from ballots that were not previously opened or counted, but it didn’t change the outcome. Dustin Trotter officially has 3,920 votes – a mere five vote margin over Samm Hurst, with 3,915.

The San Diego County Democratic Party agreed to terminate the recount after only minimal changes in the vote count once untallied ballots were examined.

According to Assistant Registrar of Voters Cynthia Paes, a little over 1,000 ballots were recounted, out of around 8,000 cast in district 4.  The full-day recount involved about 25 staffers. Both sides challenged ballots; out of nine that were uncounted and unopened, and after adjudication by Registrar Michael Vu, three were opened and counted.  Besides one vote found for each candidate, a third untallied ballot was opened and found to have neither candidate marked in the Santee Council race.

Monday night, Hurst posted on Facebook,  “I believe today was the right time to concede the race and I have called Dustin Trotter to wish him success and good luck in his new role as Councilmember for Santee’s 4th District. To everyone who has supported my race ... I am so proud of the wonderful campaign that we built together … a campaign that was always about the love we feel for the City of Santee and the quality of life we want to see preserved. Those hopes and dreams have not died with my campaign. We will continue to work toward making Santee a positive and inclusive place where every person and every family feels welcomed and valued.”

Trotter updated his Facebook page to include a photo of himself seated at the city council dais. 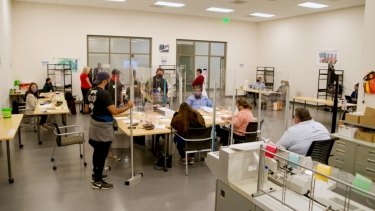 The Union-Tribune reports Trotter stated, “I’m happy to see this over, go forward serving the citizens of Santee.”

The recount was conducted in full view of public observers, with plexiglass shields and masks to protect recount workers and observers.

Both sides voiced confidence in the election process locally, overseen by Registrar of Voters Michael Vu.

“What I learned is that the Registrar does an amazing job. Going through this process just solidifies the work by Vu and his staff,” Trotter said.

Will Rodriguez Kennedy, chair of the count Democratic Party, has said he did not believe any fraud occurred but merely wanted the recount to assure accuracy because the race was so close.  “We are pretty confident the ROV and staff did not get this wrong,” he has stated. 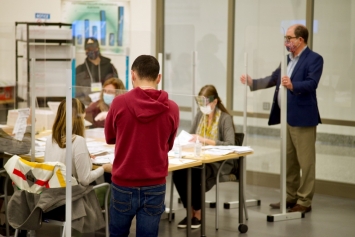 marked a victory for Republicans, pro-business and pro-development interests in Santee that heavily funded  the campaign to elect Trotter, a building contractor.

Though a disappointment for environmentalists, racial justice advocates and Democrats backing Hurst, a UCSD professor and public health scientist, the razor-thin margin in the election shows the changing demographics in this once solidly-conservative stronghold. That leaves Democrats with hopes that a victory in Santee in the future may no longer be an impossible dream.

The election outcome leaves Santee, for now, with five Republicans on the Council, since independent Stephen Houlahan gave up his Council seat to run for Mayor, but lost his mayoral race to incumbent Mayor John Minto.