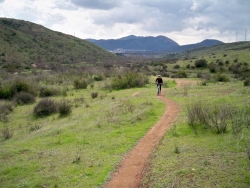 In a victory of sorts for the project’s opponents, a 30-day continuance was granted, delaying a decision on rezoning the 22-acre plot from open-space to industrial.

With Santee residents and members of the grassroots citizen group StoptheSanteePowerPlant.org (SSPP) in attendance, the message was clear: block the San Diego Planning Department’s recommended approval on changing the zoning of the site, which would clear the way for Cogentrix, a North Carolina-based company, to start construction near state Route 52 and Mast Boulevard, visible from portions of the Mission Trails Regional Park.

While a 60-day continuance was initially requested, a shorter length of time was eventually agreed upon by Councilmember Marti Emerald and Cogentrix representative Robin  Madaffer. Pursuant to this, Eric Solorio, project manager with the California Energy Commission (CEC), advised Chairman Eric Naslund and the committee that there would be a public workshop on March 22 at the Mission Trails Visitor Center. According to the CEC official notice, which was released late Thursday, the purpose of the workshop is to “continue developing a dialogue between staff, members of the public and agencies interested in the proposed project.”

Despite claims by Cogentrix that the plant will be utilized only during peak hours, and at no more than 43 percent capacity, opponents of the plant are not convinced.

Members of SSPP also ask that the California Energy Commission base the company’s request to build the plant as based upon maximum operational capacity. Cogentrix officials, including Vice President C. Richard ‘Rick” Neff, did not respond to requests for comment from this reporter.

SSPP member Roslind Varghese described the beginnings of SSPP as a true grassroots movement, in which members balanced work, family life and amateur activism. Members also went door-to-door handing out homemade flyers, and soon discovered that the majority of residents living less than a mile from the plant were unaware of its construction. 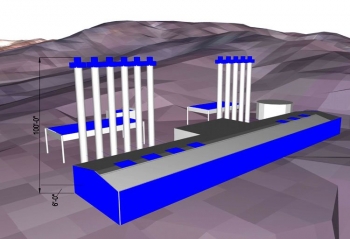 Unapologetically passionate about serving her community and protecting its environmental health, Varghese finds the actions behind the Quail Brush Project to be both “ethically and morally wrong.”

She pointed out that both the CEC and Cogentrix have yet to address any emission and noise levels based upon maximum operational capacity. Varghese attempted to address these concerns with the planning commission, but was shut down by Chairman Naslund in an unexpected procedural move when it was decided that only statements relating to the opposition of the continuance would be heard.

As a part of her plan to bring the issue of noise pollution before the commission, Varghese had also planned to cite an email posted on the CEC Web site from Dr. Ranier Kurz, a described gas turbine expert, in which he wrote that each 3 dBA (decibels, adjusted) increase was equivalent to a doubling of the noise.

According to a Noise Abatement and Control ordinance, a maximum of 75 dBA is allowed at the site. But Varghese claims that data from Cogentrix “shows the noise levels greater than 80 dBA at the site of origin.”

Varghese also disputes the environmentally-safe claims of the type of gas engines proposed for the plant, and contends that they emit higher levels of chemicals like nitrogen oxide, formaldehyde and several others.

One citizen attending the planning commission meeting was Santee resident Mike Press, who was there with his father-in-law and two young daughters. As a homeowner, Press is concerned with property values falling even further than they already have. But his biggest concern is the impact the plant would potentially have on the health of his and his neighbor’s children.

“I have a house [in Santee], my father-in-law has a house there, and my kids are going to grow up there,” said Press. “I heard a lot about the pollution, basically the air quality, noise and everything that comes with the power plant. I think even at 43 percent, it’s bad news with the emissions that are going to be put out.”

According to a May 2010 study by Lucas Davis at the University of California, Berkeley, Santee homeowners concerns about falling property values are not baseless. The study showed that homeowners living within close proximity to a power plant can expect a noticeable depreciation, usually between 4 and 7 percent.

Another sticking point with the residents is lack of communication. Many of them were unaware of the plant details, or of the construction altogether.

Dustin Carlsen was unaware of the project up until a few days ago, and is concerned about the impact on the air quality, wildlife and hiking areas. “Seems someone is trying to push this through without anyone knowing,” he said. “What about moving it to the range nearer the Miramar base and farther away from us and our children?”

Taylor Neville, a barista at Coffee Brake along Mission Gorge Road, also wasn’t aware of the specifics, and expressed concern with the close distance between the proposed plant location and the high school.

Movement from local Santee officials may be too little, and possibly too late.

While Santee Mayor Randy Voepel is opposed to the power plant, he also believes there are issues beyond Santee’s control. According to his post on the SanteePatch.com “Ask Randy” forum, two such issues are the location of the site being in City of San Diego city limits, not Santee, and budgetary shortcomings preventing Santee from pursuing a court battle.

According to the principal of West Hills High School, Paul Dautremont, and the president of the school PTSA Karen Fleck, discussions have taken place with all parties concerned, including a tour of the site, while avoiding a rush to judgment and ill-informed decision-making on the part of school and district leadership.

“West Hills High School and the Grossmont Unified High School District are aware of the project,” said Dautremont. “In the last several weeks our district has been working proactively to gather more information about the proposed power plant.”

Fleck, also the president of the Ninth District PTA, echoed Dautremont’s statement, and encourages parents to visit the school PTSA Web site, where information about the CEC workshop had been posted late Thursday evening. She also says more information will be included in the weekly GUHSD superintendent email to parents on March 16.

Ray Moore, president of the West Hills Little League, said league discussions about the plant and its impact on the parents and players at the fields will take place at the next board meeting, scheduled for later this month. While likewise waiting for more definitive information, Moore is concerned in part by winds that often blow from the northwest in the evenings. He also expressed disappointment in what he said is a lack of reasonable public notice.

Peter Adams, an SSPP member, appreciates the approved delay as it gives him more time to consolidate the area’s homeowner associations. According to Adams, two such associations pledging their support are Sunset Greens and Treviso Homeowner Associations, both of which are in an area that could be affected by the project. Adams says he is currently in discussions with several other associations, further solidifying the coalition. Like his fellow SSPP members, Adams feels that Cogentrix has been less than forthcoming regarding emission levels.

“Personally I don’t feel that Cogentrix has addressed any emissions regarding the 100 percent level,” he said. “Their papers filed with the CEC only show emissions at the 43 percent level, even though they admit that within a year of its completion, it will be at 58 percent….the plant could and most likely will run 100 percent of the time during the hottest parts of the year at 100 percent.  Therefore the air quality issue should be considered at that level.”