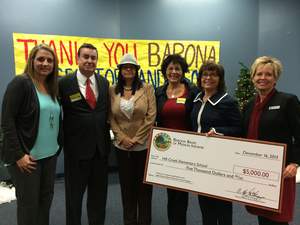 December 20, 2013 (Santee) – The Barona Band of Mission Indians is ending 2013 on a high note by awarding an education grant to a deserving local school. The program’s most recent $5,000 grant was presented by Councilwomen Beth Glasco and Bonnie LaChappa to Hill Creek Elementary in Santee, fulfilling important educational resources on both students’ and faculty’s holiday wish lists. Senator Joel Anderson nominated Hill Creek Elementary for the grant.

Hill Creek Elementary will use funds to purchase much needed technology for K through 8th grade students including 10 Tech4Learning licenses and 4 licenses for Read Naturally. The grant will also equip classrooms with three computing stations, one Dell desktop computer and 9 LED monitors, keyboards and mouse sets.

Clifford La Chappa, Chairman of the Barona Band of Mission Indians, stated,“The Barona Tribe is thrilled to present this education grant during this season of giving and we wish all of the teachers and students happy holidays. We are looking forward to awarding many more grants to deserving schools like Hill Creek Elementary in 2014.”

Since 2006, the Barona Band of Mission Indians has awarded over $2 million to more than 400 schools statewide to help bridge school budget gaps and share resources through its Barona Education Grant Program.

The program is the first of its kind in California created and administered by a Tribal Government. The goal of the program is to create strong educational opportunities for the children of California building upon the success of the Barona Indian Charter School, which operates under a continuous improvement model. Schools throughout California can apply for educational grants from Barona to purchase much needed supplies and materials that promote academic improvement. Each grant awarded by the Barona Education Grant Program is $5,000. Applications can be downloaded at http://barona-nsn.gov/education.