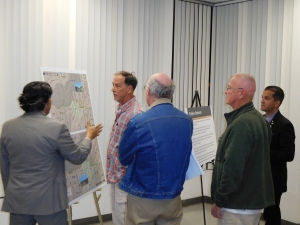 February 23, 2016 (Santee) -- Situated at the confluence of several regional connecting highways, traffic has never been smooth in and out of Santee, but it’s gotten much worse in recent years, prompting elected officials to seek out possible solutions.

At a public workshop Feb. 22 held at City Hall, a group of some 30 residents heard from consultants hired to investigate the traffic problems that now exist on State Route 52, and devise some options to provide short term relief. They were also soliciting public comment on what residents think should be done to improve things.

The ongoing traffic study aims to look at existing conditions, identify what is deficient, figure out several solutions, and determine how those solutions can be implemented, said Joe De La Garza, senior traffic engineer of WSP Parsons Brinckerhoff, the firm hired by Santee to do the study.

Once a few possible solutions are agreed upon, the goal would be to move them forward, obtain the funding and get the projects going within the next 15 years, rather than waiting for a scheduled expansion of SR- 52 in 2050, De La Garza said. 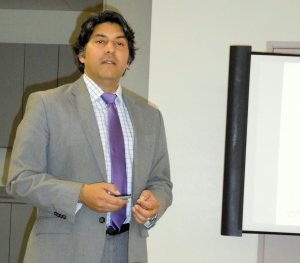 Even short term solutions will be costly. Adding a truck lane on the westbound 52 from Mast Boulevard to the summit would range from about $15 million to $20 million, he said.

Another possible short term solution might be adding an auxiliary lane on northbound Interstate 805, which is something that the California Department of Transportation has been considering, De La Garza said.

Some residents attending the workshop voiced concerns that adding more lanes isn’t going to solve the problem. As soon as the new lanes are built, more traffic inevitably fills them up again.

What’s needed is a greater emphasis on mass transit, ride sharing, and more involvement by larger employers to provide vans for commuting workers, one resident said.

Seth Torma, another traffic engineer with WSP Parsons Brinckerhoff, said the study has been looking at possible new sites to build park-and-ride lots near the 52 that could provide some relief.

The ultimate alternative, one that is already in an approved regional plan overseen by the San Diego Association of Governments or Sandag, calls for SR-52 to be widened from four to six lanes. The two middle lanes would be ‘managed,’ meaning these would be reversed daily to allow for four lanes in one direction, depending on the commute times.

But that solution is more than 30 years off, and carries an  estimated pricetag of $1 billion so that is why the city is looking at alternatives that are far less costly and could be achieved more quickly, De La Garza said.

One possible way of accelerating solutions would be to install tolls as has already been done on Interstate 15 from Kearny Mesa to Escondido, and on SR-125 in the South Bay. Another may be to increase an existing half-cent tax for regional transportation improvements, something that elected officials who guide Sandag are now considering, De La Garza said. That tax would require voter approval by a majority of county residents, possibly a tough sell given the current economy.

The current half-cent TransNet tax was extended for 40 years by voters in 2004, before the Great Recession.

But Caltrans does have some funding available for smaller projects. Another potential source for funds could be collecting developer fees, consultants said.

One resident said he was worried a proposed widening of SR-52 would eliminate the bike lanes on the highway. But that wouldn’t happen, De La Garza said. “Whatever improvements we would do will always keep those bike lanes,” he said.

The city will hold another public workshop on the traffic issue on Thursday, March 3 from 6 p.m. to 8 p.m. at the Tierrasanta Recreation Center, 11220 Clairemont Mesa Blvd. Residents are also encouraged to visit the Santee city website at www.ci.santee.ca.us to give their opinions.

The traffic study is scheduled to be completed by the end of June. Funding for the traffic study, about $385,000, was provided by HomeFed Corp., the developer of Fanita Ranch, the long-planned project near Sycamore Canyon that proposes constructing 1,380 houses on some 2,500 acres.